Mostly this kind of questions will be asked in every competitive exam to analyze the logical thinking of an applicant. So the questions of RRB General Intelligence and Reasoning will be quite tricky. Need attention on this section. Also take regular practice. Here our team will be providing General Intelligence and Reasoning questions for RRB exam on daily basis. Start your practice, analyze your standard and reveal the answer here.

1) Ram introduces Sheetal as the daughter of the only sister of his mother’s husband. How is Vinod related to Sheetal?

2) A woman walking with a boy meets up another woman on the way and when asked about the relation with the boy she said, ‘one of the sons of my father’s wife and the boy’s maternal uncle are brothers’. Then how is the woman related to the boy?

3) Among Gita’s children Ram and Sita are her favourite. Grandson of Nandha is Shravan, who is most loved by his maternal uncle Shyam. Narayanan is the head of the family succeeded by his two children Nandha and Swetha. Nandha and Gita are married and they have three children. How is Shravan’s father related to Swetha?

Direction (4 – 6): Read the following questions and answer the questions given below

A + B means A is the daughter of B

b) Mother in law

Directions (7-9): Read the following information and answer the questions

i) In a family of six persons two are married couples.

ii) H is the grandmother of L and mother of J.

iv) M is the granddaughter of I who is father of J.

8) How many male members are there in the family?

10) Pointing to Atul, Sam said, ‘He is the son of the father of my daughter’s mother’. Who is Atul to Sam?

Mother’s husband means Ram’s father. Only sister of his father means it’s his aunt. Aunt’s daughter is his cousin.

Narayanan is the head of the family. Nandha and Swetha are his children. Gita and Nandha are married. They have three children. Shravan is Nandha’s grandchild and Shyam is Shravan’s maternal uncle which means Shyam is Nandha’s son and brother of Sita and Ram. Sita is Shvan’s mother. So Sita is Swetha’s niece and her husband is no way related to Swetha.

P is the mother of R. R is the wife of S. S is the son of Q. That means R is the daughter-in-law of Q. But gender of Q is not specified. So answer cannot be determined. 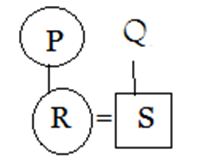 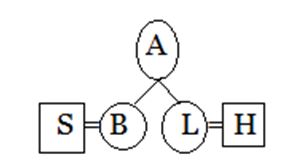 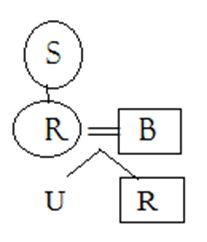 Gender of L cannot be determined.

BF is a combination of different genders i.e male – female and the rest are either female-female or male-male combination.