Mostly this kind of questions will be asked in every competitive exam to analyze the logical thinking of an applicant. So the questions of RRB General Intelligence and Reasoning will be quite tricky. Need attention on this section. Also take regular practice. Here our team will be providing General Intelligence and Reasoning questions for RRB exam on daily basis. Start your practice, analyze your standard and reveal the answer here.

DIRECTIONS (1 – 5): Read the following instruction carefully and answer the question

1) Who is sitting third to the left of red?

2) How many people sit between E and the one who likes violet colour counted from the left of D?

3) Who among the following likes green?

4) What is the position of C with respect to the one who likes yellow?

b) Third to the left

c) Second to the right

5) Three of the following are alike in a way. Which is the odd one?

DIRECTIONS (6 – 10): Read the following statements carefully and answer the question.

A certain number of friends are sitting on a bench.

iii. Damon is not sitting adjacent with Elsa.

Elsa is on the left end of the bench and Charles is on the second position from right side.

Alex is on the right side of Elsa and Ben.

Alex and Charles are sitting together each other.

6) Who sits to the second right of Charles?

d) No such person

7) Who is sitting in the centre of the bench?

8) Which statement is true about Ben?

a) Ben Sitting in the right end

b) Ben Sitting second from the right

c) Ben Sitting second to the left of Charles

d) Ben Sitting second to the right of Alex

9) Who among the following is odd?

10) If Fedrick joins with them and sits sixth to the left of Charles, then what is the position of Ben with respect to Fedrick?

a) Third to the right

b) Third to the left

c) Fifth to the right

d) Fourth to the right 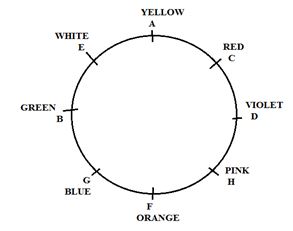