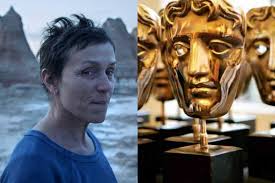 The film which is not in the English language – Thomas Witterberg, Sissy Grom (Insult Round)

British Short Animation – The Own and the Pussy Cat, Mole Hill, Laura Duncalf

Candidates preparing for Competitive exams can make use of the BAFTA Awards 2021 Winners List for Current Affairs Section preparation.

Q.Who won the BAFTAs 2021?
Nomadland by Chloe Zhao was the big winner of 2021. The movie won not only the BAFTAs for best director as well as for cinematography, but also took home the awards for best film, while Frances McDormand also received the award for leading actress.
Q.Who is the face of the Bafta award?
The iconic BAFTA mask was designed in 1955 by US sculptor Mitzi Cunliffe and has become an internationally recognized symbol of excellence in the art forms of the moving image.
Q.Are BAFTAs prestigious?
The BAFTAs certainly have all the hallmarks of Hollywood’s annual longest. For one, it’s equally prestigious.
Q.What does Bafta mean?
BAFTA: Home of the British Academy of Film and Television Arts.
Q.What is the British equivalent of the Oscars?
5 1 vote
Rating
0 Comments
Inline Feedbacks
View all comments