While most government exams require candidates to be graduates in or order to be eligible to apply, the SSC CHSL exam is held for candidates who have qualified their class 12 exams only. Due to the relaxed criteria, a lot of Indian youths apply for the SSC CHSL exam every year. The SSC CHSL exam for the current year will take place from the month of July onwards. More details about the SSC CHSL exam 2019 can be found below in the highlights table 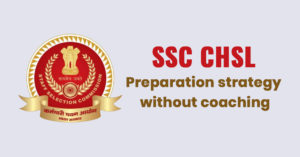 SSC conducts the CHSL exam in 3 levels, also known as the 3-tier system. The 3 levels are as follows:

Typing Test would be conducted only for candidates applying for Data Entry Operator (DEO). The final admission would be governed on the basis of total score obtained in Tier 1 and Tier 2 only.

Since there is enough tough till the SSC CHSL Tier-I exam begins, here is a month-wise study plan for you. You can follow this plan for the remaining months before the exam and prepare for SSC CHSL exam well in time.

The first week should be utilized to learn new chapters and understand new concepts. Utilize the first seven days in preparing the subjects that you might have skipped in the school or that were not in your syllabus. Don’t focus on anything else except learning new things!

The second week should be utilized to revise what you’ve learned in the previous week. We are all humans and it is natural to forget things when you don’t revise it regularly. The 2nd week shall be dedicated to revise and rework on the new chapters and concepts learned in the first week. It is also a good time to learn new things that you might have missed in the previous week.

The last week of the month shall be utilized in analyzing your preparation for the entire 3 weeks. This week you will only focus on solving mock test series for various sections and find out your weak points. After solving mock tests for the most part of the day, spare 2-3 hours, in the end, to revise your mistakes and understand why it happened.

Follow this SSC CHSL exam preparation strategy for guaranteed success in SSC CHSL exam 2019. As per the official notification re4leased by SSC, you can follow this routine for 3 months at a stretch, which means you will be able to repeat the entire study plan 3 times.

Now coming to the section-wise preparation strategy, we can see from the SSC CHSL 2019 exam pattern that a candidate needs to prepare himself for 5 sections:

Obviously, the preparation strategy for each of these sections will vary from each other, hence we’ve compiled the best ways to prepare for each section below:

The above tips can be folloowed by any individual who aspires to crack SSC CHSL without the need to take special coaching classes or tuitions. Try to incorporate these hacks in your study routine for SSC CHSL exam and you’ll be able to complete your syllabus before the exam date and perform brilliantly as well.