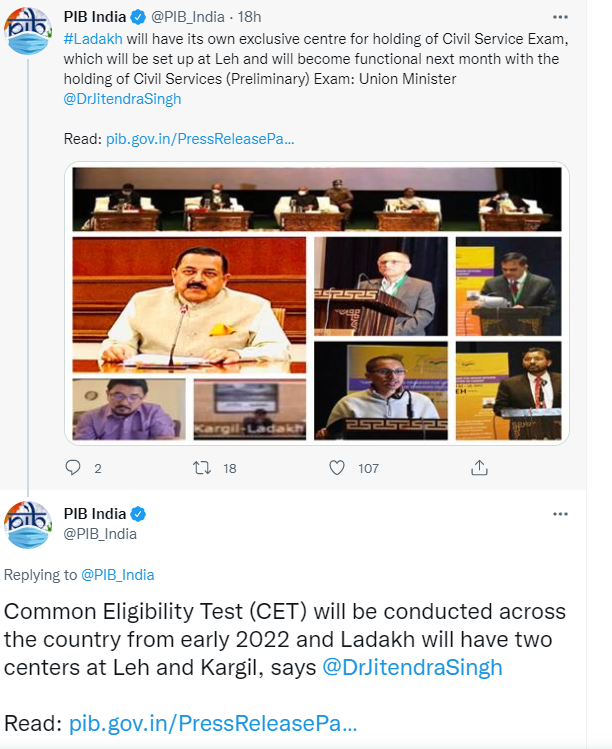 During the 2020 union budget, our Human Resource & Development(HRD) has introduced the term called Common Eligibility Test(CET). This has been termed and will implement to reduce the duration of the recruitment of competition exams. This is a major reform for the recruitment of Non-Gazetted posts. To implement this CET project, the government has proposed an agency called NRA(National Recruitment Agency). The NRA would work as an independent agency that conducts a common online computer-based test and will recruit eligible candidates.  Even though it was termed in 2020, a lot of controversies regarding the CET throughout India.

After a year, now our Union Minister Dr. Jitendra Singh said that a Common Eligibility Test (CET) will be conducted across the country from early 2022 and Ladakh will have two centers at Leh and Kargil to screen/shortlist candidates for jobs in the Government sector. The recruitment is presently carried out through the Staff Selection Commission (SSC), Railway Recruitment Boards (RRBs), and Institute of Banking Personnel Selection (IBPS). He said this is not only a Governance reform but a huge Social reform for the job aspirant youth living in remote and far-flung areas. The Minister said this historic reform will provide a level playing field to all the candidates, regardless of his or her background or socio-economic status. There will also be a huge benefit to women and Divyang candidates and for those who find it financially unaffordable to appear for multiple tests by traveling to multiple Centres, he added.