1) The Information and Broadcasting Minister Prakash Javadekar has inaugurated the India Pavilion during Cannes Film Festival. This year marks ________ Festival.

2) Which among the following minister has stated that a Common Eligibility Test for job aspirants would be conducted across the country from early 2022?

3) Which among the following ministry has been created by the government for strengthening the cooperative movement in the country?

(a) Ministry of Strength

4) The Maitree super thermal power project has been constructed with a capacity of 1,320 MW with Indian assistance in which among the following country?

7) Mandate HQ has been launched by Razorpay in collaboration with which among the following company?

8) Who among the following has been appointed as the Law & Justice Minister in the Prime Minister Modi’s new cabinet?

9) Jim Whitehurst has been decided to step down as the President of which among the following organisation?

11) The Indo Pacific Business Summit has been recently organised by Confederation of Indian Industry in partnership with which among the followingMinistry?

(a) Ministry of Commerce

12) Virgin Orbit has sent its first batch of 7 satellites into orbitfrom three countries. Which among the following country is not among them?

13) The world’s first meteorological satellite,Fengyun-3E has been launched in which among the following Rocket by the China National Space Administration?

14) ‘Matsya Setu’, a mobile App has been launched byFisheries, Animal Husbandry and Dairying Minister, Giriraj Singh, for whom among the following?

15) “India To The Rescue” ,published by Juggernaut Books, has been authored by whom among the following?

16) Virbhadra Singh,a senior congress leader,has passed away recently. He was a former Chief Minister of which among the following state?

17) Keshav Datt, a Two-time Olympic gold medallist has passed away recently. He was associated with which among the following sports?

Information and Broadcasting Minister Prakash Javadekar mentioned India has opened up a facilitation office for international filmmakers and all approvals are to be given in one go.

Inaugurating the India Pavilion during the 74th Cannes Film Festival, the Minister hoped that the world comes out of the pandemic very soon and people come back to theatres once again. This is the second year when the pavilions are being virtually organized.

Mr Javadekar stated, the virtual India pavilion can become a meeting place to meet and discuss the future of the world of cinema. The Minister further stated that many of the international films are being filmed in India with over 500 sites available.

Union Minister Dr Jitendra Singh stated that a Common Eligibility Test, CET for job aspirants will be conducted across the country from early 2022.

This unique initiative is being undertaken with the personal intervention of Prime Minister Narendra Modi to screen and shortlist candidates for recruitment to Central Government jobs.

The Minister mentioned, this initiative was scheduled to take off with the first such test before the end of this year, but is likely to get delayed due to COVID pandemic.

In the launch of e-Book Civil List-2021 of IAS officers, Dr Jitendra Singh stated, the Common Entrance Test is a path-breaking reform carried out by Department of Personnel & Training to bring about “Ease of Recruitment” for young job aspirants.

The Minister further informed that the National Recruitment Agency (NRA) for conducting CET has been constituted with the approval of the Union Cabinet.

NRA will conduct CET to screen and shortlist candidates for jobs in Government sector for which recruitment is presently carried out through the Staff Selection Commission, Railway Recruitment Boards and Institute of Banking Personnel Selection.

The Modi government announced a new ‘Ministry of Cooperation’ for strengthening the cooperative movement in the country.

This new ministry will provide a separate administrative, legal and policy framework for strengthening the cooperative movement in the country, adding that it will help deepen cooperatives as a “true people-based movement reaching up to the grassroots”.

The ministry will work to streamline processes for ease of doing business for cooperatives and enable development of multi-state cooperatives (MSCS).

In the country, a cooperative-based economic development model is very relevant where each member works with a spirit of responsibility.

India and Bangladesh have agreed to expedite work on the 1,320 MW Maitree Power Project and to ensure the timely commissioning of the first unit in December this year.

Bangladesh’s Power Secretary assured of the necessary support for completion of the project in time and appreciated the progress made by the project so far despite the COVID constraints since last year.

The project is an environmentally friendly supercritical technology based thermal power plant, and the first unit of this project would be commissioned in December 2021, coinciding with the Golden Jubilee celebration of Victory Day of Bangladesh.

Mr Sinha stated that with the launch of the new online services of Shri Amarnathji Shrine Board, the devotees of Lord Shiva from across the world can perform online virtual Puja and Hawan at the Holy Cave Shrine.

For millions of devotees who are unable to pay their obeisance at the Holy Cave shrine of Shri Amarnath Ji this year due to unprecedented COVID pandemic, Shri Amarnathji Shrine Board has brought Darshan, Hawan and Prasad facility under the virtual mode.

The devotees can book their Pooja, Hawan, and Prasad online and priests at the holy cave shrine will offer it in the devotee’s name. Prasad will be subsequently delivered at doorsteps of the devotees by the postal department.

Students can fund the account and receive the debit card so that they have a functional U.S. bank account before they leave for the U.S. In addition, the account pays up to 50X interest rates compared to other banks in the U.S.

To open an Aeldra bank account, students do not need to furnish a U.S. Social Security Number, U.S. address proof or even a U.S. visa.

The account is tailored for Indian students, professionals and investors and includes 24X7 customer service provided by ‘concierges’ who understand the needs of Indian customers.

“For Indian students preparing to begin their academic year in the U.S., easy access to money in a new country is a prime cause of concern. In India, Aeldra is based out of Bengaluru.

Razorpay’s Mandate HQ is an API-based plug-n-play solution that reduces the go-live time for any card issuing bank that wishes to enable recurring payments for its customers.

MandateHQ will also enable businesses, especially subscription-based businesses, to get access to a wider customer base, who use debit cards, as recurring payments were mostly supported via credit cards previously.

Razorpay’s MandateHQ solution can be fully integrated with any bank within 7 days, as opposed to other solutions which normally take a few weeks.

In addition to its association with Mastercard, Razorpay has also partnered with the country’s three banks and is in talks with over 20 banks to help integrate this technology into their existing payment infrastructure in the next few weeks.

As many as 43 new members are all set to be sworn in Prime Minister Modi’s new cabinet which will be one of the most inclusive with record representation of SC, ST members.

It is learnt from reliable sources that post-expansion, there will be 12 members from the SC community, including two in the cabinet; eight members will be from Scheduled Tribe category in the council of ministers out of which three will be in the cabinet. 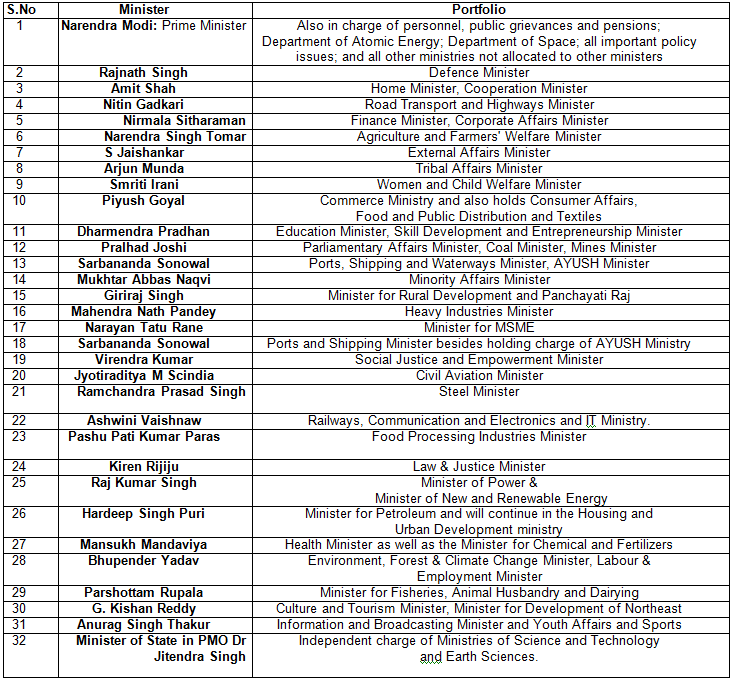 IBM has announced that Jim Whitehurst decided to step down as President of the company just 14 months after joining in that role.

Whitehurst has played a pivotal role in the $34 billion IBM and Red Hat integration announced in 2018. He will continue to work as senior advisor to Arvind Krishna, Chairman and CEO, IBM.

Basking in the success of her recently released Sherni and making the nation proud by becoming the only actor from 395 new invitees to join the Academy of Motion Pictures Arts and Sciences, the governing body behind the Oscars, Vidya Balan has now achieved yet another feat as a military firing range in Gulmarg, Kashmir, is named after the actress.

Honouring the varied accomplishments of Vidya, the Indian Army has named a military firing range in Gulmarg as the Vidya Balan Firing Range.

The Summit will have participation of Government, Enterprises, Business Chambers, Think Tanks &  Experts from all the countries in the region.

The Summit would seek to identify current and future trade and investment opportunities within this region.

It would dwell upon various thematic and sectoral sessions for discussion like physical and digital connectivity, development of robust supply chains, start-ups, healthcare, skilling, climate change and blue economy vis-a-vis current and future trade & investments opportunities highlighted by the governments within this region.

Virgin Orbit sent its first batch of satellites into orbit & It is the second successful rocket launch from a plane.

The jets are took off from California’s Mojave Desert. LauncherOne is a 70-foot-long (21-m-long) two-stage rocket, capable of delivering up to 1,100 pounds (500 kg) of freight to orbit.

The drop occurred at an altitude of about 37,000 feet (11,000 meters).The satellites are from the U.S. Defense Department, the Royal Netherlands Air Force and Poland’s SatRevolution company.

The China National Space Administration informed, the satellite is launched onboard the Long March-4C carrier rocket, which placed it into its planned orbit.

Fengyun-3E(FY-3E) will be the world’s first meteorological satellite. The Satellite Equipped with 11 remote sensing payloads & it is the fifth in the series and the third operational satellite.

The satellite is designed to serve for eight years.

The app has been developed by the ICAR-Central Institute of Freshwater Aquaculture (ICAR-CIFA), Bhubaneswar, with the funding support of the National Fisheries Development Board (NFDB), Hyderabad.

The Matsya Setu is an online course app with the objective to bring the latest freshwater aquaculture technologies to the aqua farmers of the country.

A new children’s book, India To The Rescue, Authored by Sushant Singh & Shruthi Rao. The Book was published by Juggernaut Books.

It is based on journalist Sushant Singh’s Operation Cactus: Mission Impossible in the Maldives.

The Book hails the operation as one of the country’s quickest, boldest and most successful missions.

Virbhadra Singh was popularly known as Raja Sahib. He was the 4th and longest-serving Chief Minister of Himachal Pradesh.

Born on December 29, 1925 in Lahore. Datt was a member of the Indian hockey team that won the gold medal at the 1948 London Olympics.

Keshav Dat  was conferred with the Mohun Bagan Ratna award in 2019, becoming the first non-footballer recipient of the honour.