2). A and B invested some amount in a business. After 4 months, C joined them. The difference between the profits of A and C were given. B’s profit had to be calculated.

3). The difference between the marked price and cost price of a certain product is Rs. 60/-. The profit obtained from the sale of that item is Rs. 360/-. If a discount of 20% was given, calculate the Cost price of that item.

4). The perimeter of 2 squares are 64 & 32 metres respectively. Find the perimeter of the third square, whose area is equal to the difference between the areas of first 2 squares?

6). A boat can row downstream for 13.2 km in 36mins. If the speed of the boat in still water is 20 kmph, then how what distance will the boat travel upstream in 32 minutes?

7). Sum of the Numbers is 12. If the Second Number is reversed, then the number is less than X by 18. Find the numbers?

9). Mixture Initial ratio of Milk and Water 5:1. 12 lit of mix taken out and 16 lit water added.New Percentage of Water was 30%of mixture find initial mix quantity 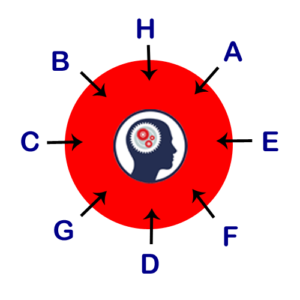 2). Eight persons J, K, L, M, N, O, P and Q sitting in a Circular table facing center but not necessarily in the Same order. M sits third to the Right of P. Only one person sits between M and J. L sits second to the left of O. L sits neither immediate neighbor of M nor K. Three person sits between Q and K. Q is not an Immediate of O.

R is son of G. G is mother in law of T. T is the son of Q. Q is the grandfather of L. Only one child of Q is married.

1). How many such pairs of letters are there in the word NATIVELY which have as many letters between them in the word (both forward and backward) as in the alphabetical order?

2). How many digits are remain in the same position when digits in the number 8132675 arranged in ascending order from left to right?

4). How many such pairs of letters are there in the word ‘IMAGES’ which have as many letters between them in the word as in the alphabetical order?

All hills are mountain.

All mountains are peaks.

All rats are cat.

Some cats are bat.

A porcupine came and asked a dog for food. The dog said he had no food but showed him a field of sugarcane belonging to a judge. “Eat as much as you want,” said the dog, “but leave the roots intact so that the plants will grow again.” The porcupine found the sugarcane sweet and juicy. He began to visit the field every day. In the beginning he ate only the stems, as directed by the dog, but after a few days he began to eat the roots too. One day the judge saw the destruction in his field and was very angry. He called the dog and accused him of destroying his crop. The dog said it was the porcupine that was to blame. The porcupine said he was innocent and suggested that the matter be settled in court. The judge agreed.

The porcupine waited till winter set in. Then one chilly morning he went to the dog’s house and told him the judge had summoned them. When they entered the judge’s chamber the dog began to shiver with the cold. “See how he trembles, Your Honor,” said the porcupine. “Isn’t that a sure sign of guilt?” “What do you have to say for yourself?” asked the judge, looking sternly at the dog. But the dog’s teeth were chattering with the cold and he could not speak. Thinking that his silence was an admission of guilt, the judge pronounced him guilty and kicked him out of the house. Whenever a dog barks incessantly, Africans say he is warning the judge that the porcupine has got into his field.

Note: This passage was taken from the book “Grateful Heart: HeartSpeaks Series – 5” authored by: Joji Valli.