1) Merger of Vijaya Bank and Dena Bank with Bank of Baroda has come into effect from which date?

2) ‘Chhilchhila Wildlife Sanctuary’ is located in which Indian state?

3) What is the capital of Kyrgyzstan?

4) ‘Deen Dayal Upadhyaya Port’ is located in which of the following state?

5) ‘Irani Trophy’ is associated with which sports?

6) Which of the following is a unique institution exclusively focused on Banking Technology?

7) NFRA, an independent regulator for the auditing profession recently got its chairmen recently. What does F stands for in NFRA.

8) With which article of the Indian Constitution is Money Bill related?

9)  ___________ is an electronic fund transfer system that operates on a Deferred Net Settlement (DNS) basis which settles transactions in batches.

10) _________ is the process by which the ownership of the credit instrument is transferred from one person to another.

d) All of the Above

e) None of the Above

Bank of Baroda merger with Vijaya Bank and Dena Bank has come into effect from 1st April 2019.

The Chhilchhila Wildlife Sanctuary also known as Seonthi Reserve Forest, is located in Kurukshetra district in the Indian state of Haryana. 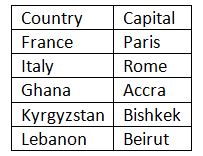 The Kandla Port or Deendayal Port is a seaport in Kutch District of Gujarat state in western India.

In February, 2019, Vidarbha became the only 3rd team after Bombay and Karnataka in Indian domestic Cricket history to defend their Irani cup titles at Jamtha Stadium in Nagpur by defeating ‘Rest of India (RoI)’ team.

IDRBT is a unique institution exclusively focused on Banking Technology.

The Centre has appointed former IAS officer Rangachari Sridharan as chairperson of the National Financial Reporting Authority (NFRA), an entity which will function as an independent regulator for the auditing profession.

Under Article 110(1) of the Constitution, a Bill is deemed to be a Money Bill if it contains only provisions dealing with all or any of the following matters:

(a) the imposition, abolition, remission, alteration or regulation of any tax;

(b) regulation of borrowing by the government;

(c) custody of the Consolidated Fund or Contingency Fund of India, and payments into or withdrawals from these Funds;

(d) appropriation of moneys out of the Consolidated Fund of India;

(e) declaring of any expenditure to be expenditure charged on the Consolidated Fund of India or the increasing of the amount of any such expenditure;

(g) any matter incidental to any of the matters specified in sub-clauses (a) to (f).

In documentary credit, usually the beneficiary’s bank which agrees to pay the beneficiary by purchasing a negotiable instrument (importer’s or buyer’s draft) also called accrediting party.