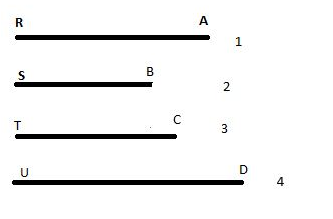 Six people Raju, Ramu, Ravi, Ramesh, Rajesh and RItesh are standing in line 1- RA. All of them are facing north. With distance between them increasing in multiples of 7(i.e., if suppose Raju is at left end of the line at point R then the remaining people will stand at a distance as follows- 7 m ,14 m,21 m…).

Raju is standing at the left end of the line. More than two persons are standing between Raju and Ramu.Ravi stand second to the left of Ramu. Ritesh is not an immediate neighbor of Ravi. Only one person stands between Ritesh and Ramesh.

Similarly, Six people- Samanta, Sneha, Sangeeta, Sarita, Swetha and Sujitha are standing are in line 4- UD. All of them are facing south. With the distance between them increasing in multiples of 9.(i.e, if first person is at left end of the line at point U and the remaining will be stand at a distance as follows- 9m, 18m, 27 m…)

Q1. In the line 4-UD what is the distance between Swetha and Point D?

Q3. If in line 4-UD, people stand in multiples of 13 in the same order, and rest of them move to line 3-TC and stands from left end in the same order. Then the distance between Samantha and point C is?

Q4. Suppose line 1-RA is joined to line 2- SB to form a new straight line RB in such a way that distance between the points A and S is 5 m. If the people in line 1-RA are made to stand in multiples of 12, then how far is Ramu from point B?

Q5. If in line 1- RA people stand in distance at multiples of 9 in the same order, and rest of them move to line 2- SB maintaining then who will be standing in Line 2?

Direction (6-10). Study the given information and answer the following questions.

Seven Persons are sitting in a straight line. Four of them are facing south and the remaining three are facing north. They also like different fruits Apple, Banana, Grapes, Guava, Kiwi, Mango, and Orange but not necessarily in same order. Those seven people are also sitting in alphabetical order from left end.

Q6. Who among the following is sitting in the row?

Q7. Who among the following is face south direction?

Q8. Which of the given fruit does D like?

Q10. Which of the following combination is true?

Direction (11-15). Study the given information and answer the following questions. 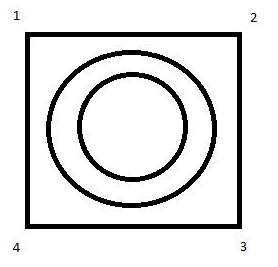 Eight friends- Isha, John, Keerti, Laxmi, Mourya, Neeraj, Omkar and Pradeep are sitting in inner most Circle which has Eight vacant seats. Four of them are facing center and four are facing away from the center

Now they started playing cards game. They shuffled a pack of cards. Isha draws one card changes her place according the given conditions, similarly in clock wise remaining persons also draw cards.

Q11. After all the persons changed their places based on the above conditions, who among the following is sitting at corner 2 of the Square?

Q12. After all the persons changing their places based on the above conditions how many are left in inner most circle?

Q13. After all persons changing their places based on the above conditions then who among the following is sitting to the immediate left of Mourya?

Q14. After all the persons changing their places based on the above conditions, how many persons are facing away from centre?

Q15. After all the persons changing their places based on the above conditions , Who among the following is sitting in outer circle exactly same position as Isha is sitting in inner circle?