Dear Aspirants, Our IBPS Guide team is providing a new series of English Questions for IBPS RRB Clerk 2019 so the aspirants can practice it on a daily basis. These questions are framed by our skilled experts after understanding your needs thoroughly. Aspirants can practice these new series questions daily to familiarize with the exact exam pattern and make your preparation effective. 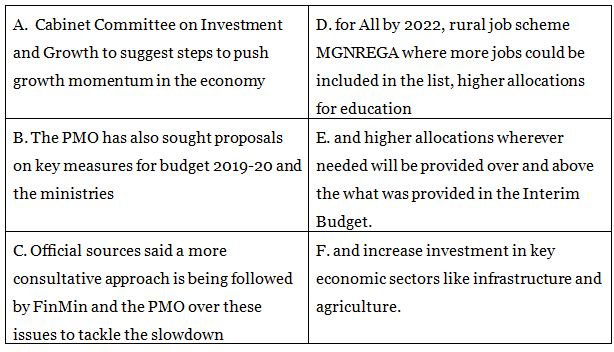 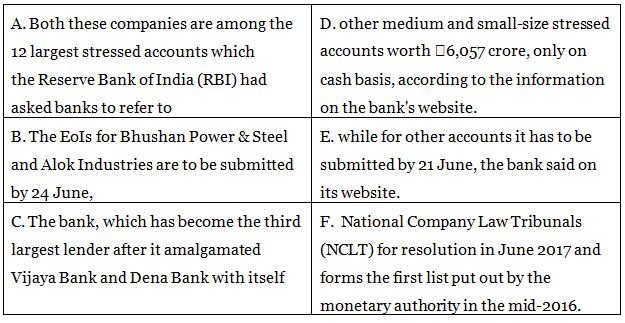 A-D:Six of the 10 most valued domestic firms together lost ₹34,590 crore in market valuation last week in a sluggish broader market.

B-D: The finance ministry is likely to propose ₹50 crore as the turnover threshold for entities to generate e-invoice on a centralised government portal for business-to-business (B2B) sales as it looks to curb GST evasion, an official said.

A-E:Asserting that Indian aviation sector has terrific potential, SpiceJet chief Ajay Singh has said imbalances in regulatory and taxation structure need to be corrected for the sector, which can be a bright spot of the economy.

B-F:Singh, who has helmed the turnaround of the once ailing low cost carrier, said big bold reforms and more out of the box thinking can be expected from the government.

B-E:Britain and France have been among the most vocal proponents of proposals to tax big tech companies that focus on making it more difficult to shift profits to low-tax jurisdictions, and to introduce a minimum corporate tax.

C-D:Big Internet companies say they follow tax rules but they pay little tax in Europe, typically by channelling sales via countries such as Ireland and Luxembourg, which have light-touch tax regimes.

C-E:Official sources said a more consultative approach is being followed by FinMin and the PMO over these issues to tackle the slowdown and higher allocations wherever needed will be provided over and above the what was provided in the Interim Budget.

A-F:A Cabinet Committee on Investment and Growth to suggest steps to push growth momentum in the economy and increase investment in key economic sectors like infrastructure and agriculture.

A-E: IDBI Bank, the prime lender to JIL, which has around 18% vote share is already against the bid on the ground of the resolution plan being “conditional”.

C-F:In May this year, the Committee of Creditors (CoC) rejected a bid of Suraksha Realty through a voting process, following which, the CoC decided to consider NBCC’s offer.

B-F:Though the 2019 results show that regional parties appear to have held their ground, the numbers hide more than they reveal.

A-F:Both these companies are among the 12 largest stressed accounts which the Reserve Bank of India (RBI) had asked banks to refer to National Company Law Tribunals (NCLT) for resolution in June 2017 and forms the first list put out by the monetary authority in the mid-2016.

C-E:In its latest forecast, the weather department has stated that a low pressure area has formed over south-east Arabian Sea and adjoining Lakshadweep area and East Central Arabian Sea at 3 am on Sunday.

A-E:India has said countries must have the sovereign right to use their data for welfare of people, and free trade advocacy should not necessarily lead to justification for free flow of data.

C-D:It was stated by Commerce and Industry Minister Piyush Goyal at the two-day G20 Trade Minister’s meeting at the science city of Tsukuba in Japan Saturday.