There are many methods or techniques which can be used to convert numbers from one base to another. We’ll demonstrate here the following:

Decimal to Other Base System:

Step 1 – Divide the decimal number to be converted by the value of the new base.

Step 2 – Get the remainder from Step 1 as the rightmost digit (least significant digit) of new base number.

Step 3 – Divide the quotient of the previous divide by the new base.

Step 4 – Record the remainder from Step 3 as the next digit (to the left) of the new base number.

Repeat Steps 3 and 4, getting remainders from right to left, until the quotient becomes zero in Step 3.

The last remainder thus obtained will be the most significant digit (MSD) of the new base number.

Other base system to Decimal System:

Step 1 – Determine the column (positional) value of each digit (this depends on the position of the digit and the base of the number system).

Step 2 – Multiply the obtained column values (in Step 1) by the digits in the corresponding columns.

Step 3 – Sum the products calculated in Step 2. The total is the equivalent value in decimal. 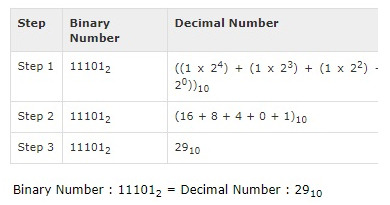 Other Base System to Non-Decimal System:

Step 1 – Convert the original number to a decimal number (base 10).

Step 2 – Convert the decimal number so obtained to the new base number. 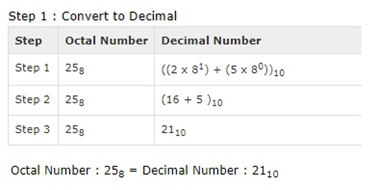 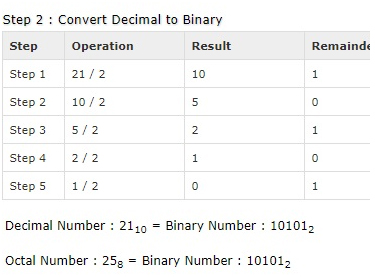 Step 1 – Divide the binary digits into groups of three (starting from the right).

Step 2 – Convert each group of three binary digits to one octal digit.

Step 1 – Convert each octal digit to a 3 digit binary number (the octal digits may be treated as decimal for this conversion).

Step 2 – Combine all the resulting binary groups (of 3 digits each) into a single binary number.

Step 1 – Divide the binary digits into groups of four (starting from the right).

Step 2 – Convert each group of four binary digits to one hexadecimal symbol.

Step 2 – Combine all the resulting binary groups (of 4 digits each) into a single binary number.