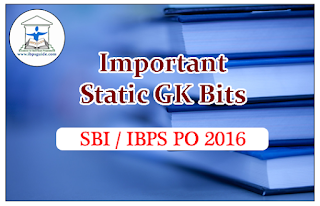 Important Static GK Bits for (Rivers& Place of Birth) SBI / IBPS PO Exams 2016 Set -10:
Dear Readers, Now a days in bank exams, more number of questions were asked from Static General GK, so everyone has started focusing more on it. To help you in this part here we have given the list of important Static GK Bits. Candidates those who are preparing for the exams can make use of it.