Dear Aspirants, Our IBPS Guide team is providing new series of Reasoning Questions for LIC HFL Associate/ Assistant 2019 so the aspirants can practice it on a daily basis. These questions are framed by our skilled experts after understanding your needs thoroughly. Aspirants can practice these new series questions daily to familiarize with the exact exam pattern and make your preparation effective.

Directions (1-3): Study the following information carefully and answer the questions given below:

1) What is the shortest distance between her home and Market?

2) What direction Teena’s home with respect to Market?

3) What direction bus stop with respect to Teena’s home?

5) In a certain coded language, ‘GOLDEN’ can be coded as ‘HNMEDO’ similarly ‘BEFORE’ can be code as?

Directions (6–10): Study the following information carefully and answer the questions given below it.

Eight persons A, B, C, D, E, F, G and H are from ten countries viz., India,England, Srilanka, Canada, Netherland, Japan, Australia and Pakistan. All of them wish to learn another one languages viz., English, Hindi, Bengali, Russian, Japanese, Spanish,Chinese and Arabic not necessarily in the same order.

B is from Pakistan.E is from Australia and learns Bengali. The person one who learns Hindi is from England. H learns Arabic. A is from Srilanka. F does not learn Hindi. D is not from England.The person one who is from Canadalearns neither Russian nor Chinese. H is not from Canada. One who learns Japanese is from Netherland.G does not learn Japanese. D is from Japan. A learns either Spanish or English. C is from either Canada or India. One who is from Pakistan does not learn Chinese or Spanish.

6) Who among the following learn English?

7) Who among the following is from Canada?

8) Who among the following is from Netherland?

9) The person who learn Chinese is from which of the following country?

10) Which of the following combinations are true? 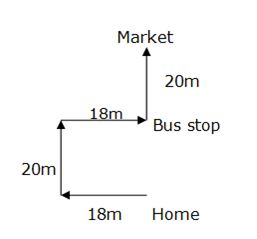 Either 24thSeptember or 26th September

Vowels are coded as previous letter in the alphabetical order

Consonants are coded as the next letter in the alphabetical order. 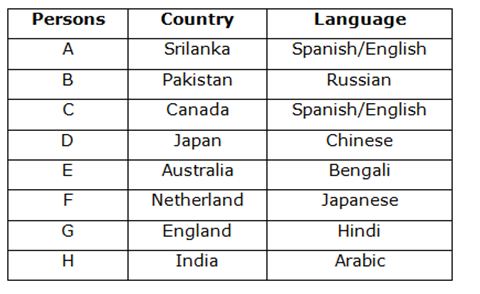 B is from Pakistan. E is from Australia and learns Bengali. A is from Srilanka. D is from Japan. A learns either Spanish or English. C is from either Canada or India. 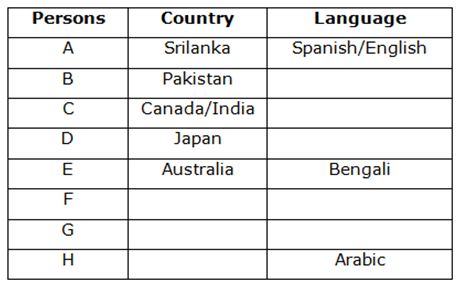 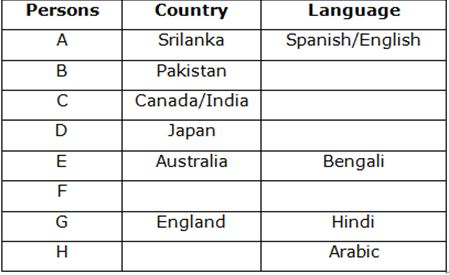 The person one who is from Canada learns neither Russian nor Chinese. H is not from Canada. One who learns Japanese is from Netherland. G does not learn Japanese.

One who is from Pakistan does not learn Chinese or Spanish. Since D learns Chinese, 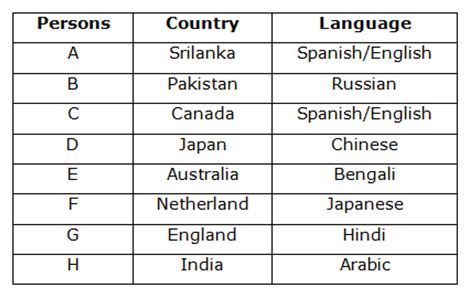 So the final arrangement is, 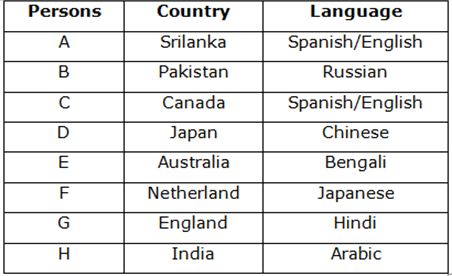