In a bid to decrease the burden on students and various recruitment agencies, the Union Cabinet on 19th August 2020 has approved the setting up of NRA (National Recruitment Agency) which will be responsible for conducting the CET (Common Eligibility Test). The CET will be held for various Central Non-Gazetted Group ‘B’ and Group ‘C’ posts and it will be conducted twice a year with the validity of the score up to 3 years. The NRA CET Exam date has been announced.

According to the latest update from the official press release of Press Information Bureau (PIB), The Union Minister of State(Independent Charge) Dr Jitendra Singh in a written reply in Lok Sabha today said that NRA is expected to conduct Common Eligibility Test (CET) from September 2021 onwards. This release has brought a lot of clarity among aspirants who were in a dilemma regarding the NRA CET exam dates. The Press Release from PIB for the same can be seen below:- 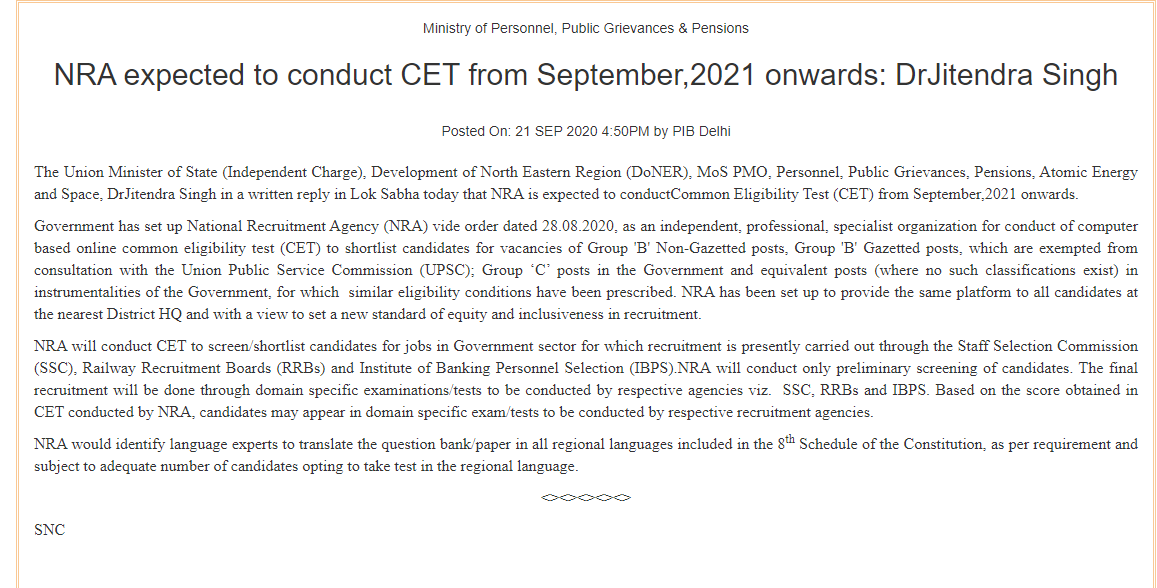 NRA stands for National Recruitment Agency. It will conduct examinations for various Central Government jobs. It will have representatives from the Ministry of Railways, Ministry of Finance/Department of Financial Services, the SSC, RRB & IBPS. These representatives will decide the syllabus and pattern for the CET.

CET stands for Common Eligibility Test. It will be a computer-based online test. The National Recruitment agency will initially aim to replace the Prelims examination conducted by Staff Selection Commission (SSC), Institute of Banking Personnel Selection (IBPS) and Railway Recruitment Board (RRB). Therefore, the aspirants instead of appearing for multiple examinations conducted by these agencies will have to appear for only one Prelims examination. However, the further process till the final selection will be conducted by the respective agencies.

Candidates should note that there will be separate examination and syllabus for Graduate-level, Senior Secondary level(12thpass) and Matriculate level (10th pass) jobs.

From when NRA CET will be held?

NRA CET will not be held this year and it will come into force from September 2021.

Score Validity and No. of Attempts

It is important to note that the CET score will be valid for up to 3 years and the aspirants will get a chance to improve their scores by re-appearing in CET during these 3 years and the best of scores of the candidate will be considered. Also, there will be no restrictions on the number of attempts a candidate can take for CET, subject to the upper age limit.

As of now, the syllabus and exam pattern of the CET has not been released and we will update you as soon as the syllabus is out.

Benefit for Rural Youth and Women

NRA CET will prove to be a great boon for the rural youth as the government has allocated Rs. 1571.57 crore for the setting up of NRA and examination infrastructure in the 117 Aspirational Districts. Government is planning to set up examination Centres in each district. Currently, apart from examination fees for different exams, the candidates, especially from rural areas, have to take the extra burden for travelling, lodging and other such expenses. Implementation of CET will reduce these burdens on the candidates to a great extent. Also, Women candidates, especially from rural areas, face constraints in appearing for multiple examinations as they have to arrange for transportation and places to stay in case of faraway examination Centres.

The CET will be held in multiple languages which will greatly help the candidates from various parts of the country.

Scores to be Accessed by Multiple Recruiting Agencies

Initially, the scores would be used by the three major recruitment agencies. However, over a period of time, it is expected that other recruitment agencies in the central government would adopt the same. Further, it would be open for other agencies in the public and private sectors to adopt it if they choose to. This will increase the number of job opportunities for aspirants.

Shorting of the Recruitment Cycle

With the help of CET, the recruitment agencies will be less burdened and this, in turn, will shorten the recruitment cycle. Some departments have indicated they will recruit the candidates on the basis of CET scores, Physical Tests and Medical Examinations without getting into the process of Tier 2 and Tier 3 examinations.

Candidates can check the official press release from PIB here.

Q1. When will the CET NRA be conducted?

Ans. According to the latest notification, the NRA CET will be conducted from September 2021.

Q2. Will NRA CET be held in multiple languages?

Ans. Yes the NRA CET will be conducted in multiple languages.

Q4. What is the syllabus for CET NRA?

Ans. As of now, the syllabus has not been released by the authorities.

Q5. What is the exam pattern for CET NRA?

Ans. The Exam Pattern for CET NRA has not been released yet. we will update you on the ibpsguide website as soon as they are released.