Dear Readers, Reasoning Section play a vital role in Banking and all other competitive exams. This year 2018 was started with three wonderful opportunities; Most Awaited SBI Clerk 2018. To enrich your preparation here we have providing new series of Practice Questions on Reasoning Ability – Miscellaneous. Candidates those who are going to appear in Bank Exams 2018 can practice these questions daily and make your preparation effective.

Directions (1-3): Study the following information carefully and answer the given questions.

1) What is the distance between G and F?

2) Point I is in which direction with respect to point J?

3) If a person walks 6 m in West direction from point K then, G is in which direction of the current position?

Directions (6 -10): Study the following arrangement carefully and answer the questions given below:

6) How many such vowels are there in the above arrangement, each of which is immediately followed by a number but not immediately preceded by a consonant?

7) Which of the following is exactly in the middle between 5 and 9 in the above arrangement?

8) Four of the following five are alike in a certain way based on their position in the above arrangement and so form a group. Which is the one that does not belong to that group?

10) Which of the following is sixth to the left of the Nineteenth from the left in the above arrangement? 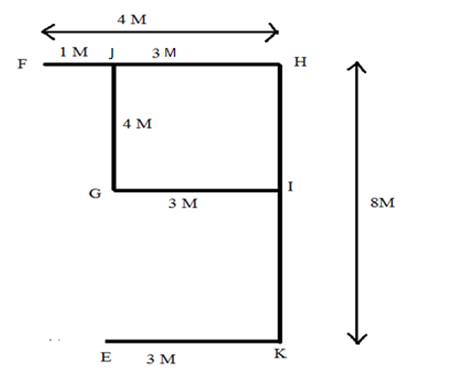 Second digit from left end is=6

There is only one vowel (U) that satisfies the given condition.

Each letters lying between 5 and 9 are:

The middle element is 3.

There are two numbers (4 and 7) that satisfy the given condition.