Dear Aspirants, Our IBPS Guide team is providing new series of Reasoning Questions for LIC AAO/SBI PO 2019 so the aspirants can practice it on a daily basis. These questions are framed by our skilled experts after understanding your needs thoroughly. Aspirants can practice these new series questions daily to familiarize with the exact exam pattern and make your preparation effective.

1) How many such pairs of letters are there in the word ‘ANIMATION’ each of which has as many letters between them in the word as in the English alphabet?

2) In a class of 30 students, Ankit ranked eighth from the top. There are eight persons between Ram and Ankit. Then what will be the rank of Ram from bottom?

Direction (3-5): Read the following information carefully and answer the questions given below.

There are six persons J, K, L, M, N and P in a group and they all are in different weights but not necessary in the same order. K is lighter than only two persons. M is heavier than N but lighter than J. Only two persons are between L and M. N is not the lightest person in the group. L is heavier than M. The one who is the second lightest is 63 kg.

3) Who among the following is the lightest?

5) If X is exactly lies between J and K. Then what will be the position of X?

Direction (6-10): Study the given information carefully and the answer the following question below.

Eight Exams A, B, C, D, E, F, G and H are held in forenoon and afternoon session of four different days of the week starting from Monday to Thursday. Not more than two exams held in a day.

6) Which of the following exam was held just before C?

7) How many exams were held between H and G?

8) If all the exams are held in alphabetical order starting from Monday forenoon session, then how many exams remains unchanged from its original schedule?

a) Forenoon of Wednesday

b) Afternoon of Thursday 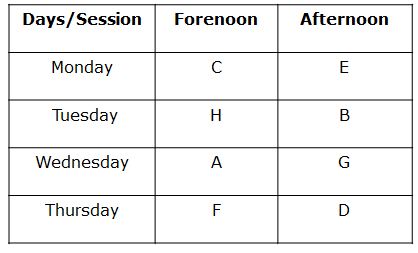 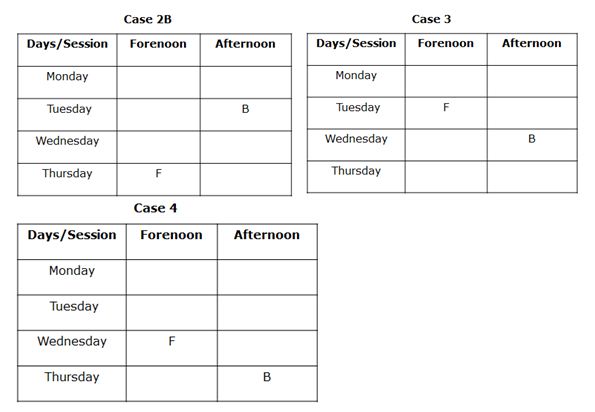 From these two statements we cannot fix the Exam date of E and G in case 2A, 3 and 4. So these cases are eliminated.