Dear Aspirants, Our IBPS Guide team is providing new series of Reasoning Questions for IBPS Clerk Prelims 2019 so the aspirants can practice it on a daily basis. These questions are framed by our skilled experts after understanding your needs thoroughly. Aspirants can practice these new series questions daily to familiarize with the exact exam pattern and make your preparation effective.

1)  How many such pairs are there in the word  “CINEMATOGRAPHY” each of which has as many letters between them, in the word as per English alphabet order, When calculated in both forward direction and backward direction ?

2) There were 70 students in the class. First 20 ranks were got by girls, out of 30 girls. Only 10 girls did not get any rank. Anoop took 35th rank from bottom, then what will be the rank of Anoop from top, in boys from the class?

Direction (3-5): Read the following information carefully, and answer the questions given below.

7 persons K, L, M, N, O, P, Q are in different heights. Only three persons shorter than L. There are two persons between L and P.

3) If K is  taller than P, Then who among the following are shortest?

Direction (6-10):Study the following information carefully and answer the questions given below:

6) Which of the following person sits to the immediate left of U?

7)  How many persons sit between R and P?

9) Which of the following statement is true?

a) U sits second to the left of V

b) Three persons sit between Q and R

c) More than two persons sit between V and S

d) P sits third to the right of W

e) Immediate neighbours of T facing opposite direction to each other.

10) How many persons are facing north? 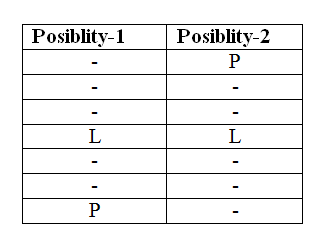 Here they said K is taller than P so, P must be shortest among all.

While proceeding it, 2 possibilities will occur

R sits third to the right of W. 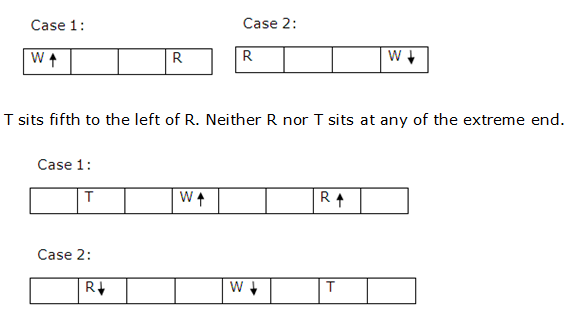