Directions (Q. 1-5): Study the following information carefully to answer the given questions.

A word and number arrangement machine when given an input line of words and numbers rearranges them following a particular rule in each step. The following is an illustration of the input and its rearrangement.

Step V is the last step of the above input. As per the rules followed in the above steps, find out in each of the following questions, the appropriate step for the given input below and answer the questions based on it.

Directions (6-10): Study the following information carefully and answer the given questions.

Eight friends—A, B, C, D, E, F, G and H—are sitting around a square table in such a way that four of them sit at four corners of the table while the other four sit in the middle of the four sides. Those who sit in the middle of the four sides face the centre while those who sit at the four corners face outside. A sits third to the left of C, who does not sit at any of the corners. E sits to the left but not on the immediate left of F, who is not an immediate neighbour of C. B and H are the immediate neighbours of neither each other nor of A and D respectively. D does not sit in the middle of any sides and at least two persons can sit between A and D. E and G sit opposite each other but do not face each other. F cannot sit opposite C.

Directions (11-15): Study the following information carefully and answer the questions given below.

Ten students are sitting in twelve seats in two parallel rows containing five student each, in such a way that there is an equal distance between adjacent persons. In row 1, A, B, C, D and E are seated and all of them are facing south, and in row 2, P,Q, R, S and T are sitting and all of them are facing north. One seat is vacant in each row. Therefore, in the given seating arrangement each student seated in a row faces another student of the other row. All of them like different subjects i.e. Hindi, English, Maths, Science, History, Geography, Civics, Art, Sanskrit and Urdu. A sits second to left of one who like Hindi subject. T sits one of the extreme ends of the row. There are three student sit between T and S, who likes English subject. Immediate neighbor of T faces B. One of immediate neighbor of B faces R, who likes Maths subject. C likes Science subject and sits second to left of vacant seat. One of immediate neighbor of R is Q and he likes History subject. One of immediate neighbor of Q faces D and he likes Geography subject. The one who likes Civics subject sits immediate left of the one who likes Art subject. The one who likes Sanskrit subject sits third to left of person who likes Urdu subject. Either the seat which is adjacent to A or the one who likes Hindi subject is on the extreme end of the row. There are no vacant seats adjacent to R

a) if either conclusion I or II follows.

b) if only conclusion I follows.

c) if neither conclusion I nor II follows.

e) if only conclusion II follows.

All writers are honest.

No honest is an engineer.

No artist is a writer.

Some plants are trees.

All trees are woods.

All woods are shrubs.

All workers are honest.

Some honest are poor.

No poor is rich.

Some doors are windows.

No window is a wall.

All walls are buildings.

some computers are tablets.

All laptops are computers.

No phone is a laptop. 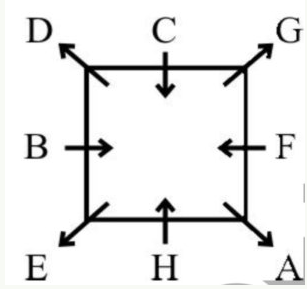 20).Answer: E)
All laptops are computers (A) + Some computers are tablets (I) = A + I = No conclusion. Hence, conclusion I does not follow. Again, from statement first the possibility in II exists. Hence conclusion II follows.