1). How many persons faces centre of the circle?

2). If all the persons are made to sit in alphabetical order from P in clockwise direction, then how many of them will remains in their original position except P?

3). How many persons sits between P and Q, when counted in clockwise direction from P?

4). Four among the following five are alike in such a way based on their arrangement, find the one who does not belongs to the group?

Direction (6-10): In these questions a relationship between different elements is shown in the statements. The statements are followed by two conclusions. Give answer

A @ B means B is greater than or equal to A

A # B means B is greater than A

A % B means B is less than or equal to A

a). Only Conclusion I follows

b). Only Conclusion II follows

c). Either Conclusion I and II follows

d). Neither Conclusion I and II follows

e). Both Conclusion I and II follows

Direction (11-15): Read the following information carefully and answer the questions given below.

11). On which floor does the person, who attends the interview at 7.30 lives?

12). If all the persons are made to sit in alphabetical order from top floor to bottom floor, then how many of them will remains in their original position?

13). How many persons attended the interview between B and D

14). On which time does B attends the interview?

15). How many persons were attending the interview after one who lives in floor number 4?

Directions (Q. 16-20): Study the following information carefully to answer the given questions.

A word and number arrangement machine when given an input line of words and numbers rearranges them following a particular rule in each step. The following is an illustration of the input and its rearrangement.

Step V is the last step of the above input. As per the rules followed in the above steps, find out in each of the following questions, the appropriate step for the given input below and answer the questions based on it. Input: curtail 53 vitiate 49 33 artifice 45 aptitude 23 ice 69 entourage bevy 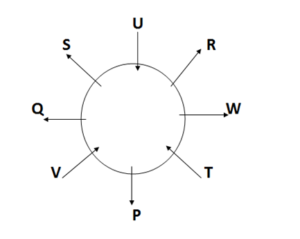 Either I or II follows