Dear Aspirants, Our IBPS Guide team is providing a new series of English Language Questions for RRB Clerk Mains 2020 so the aspirants can practice it on a daily basis. These questions are framed by our skilled experts after understanding your needs thoroughly. Aspirants can practice these new series questions daily to familiarize with the exact exam pattern and make your preparation effective.

Words choosing – Match the column based

Direction (1-5): In each of the following questions given below, a sentence / sentences is /are given with some bold words which may contain errors. Below each of them, a table is given with two columns in which column ‘A’ contains the list of bold words, and in column ‘B’ the suggested corrections are listed. You have to choose the best alternate among the four given options. If no correction is required against the given bold words, mark (e) .i.e. “None of the above” as your answer.

1) The hard Brexiteers in Mr. Johnson’s Conservative Party wereclinical of this clause, claiming that it endangers the U.K.’s sovereignty. Now, the planned domestic legislation, the Internal Market and Finances Bill, will allow U.K. courts to follow new U.K. laws rather than the divorce agreement. 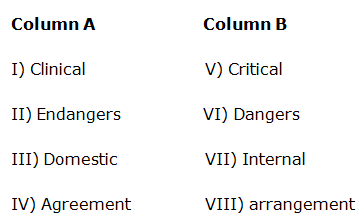 2) While his threat hangs same as the sword of Damocles with the negotiating teams, the British government is reportedly planning a piece of legislation that would overwrite parts of the withdrawal agreement — the divorce deal signed between the U.K. and the EU last year 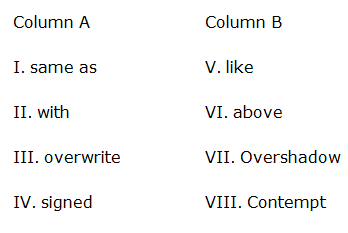 3) From the Shipping Ministry’s call for the duty and manufacture of indigenous tugboats with auto component makers being told to abjure foreign parts, the thrust of the initiative is evidently ‘import substitution’. 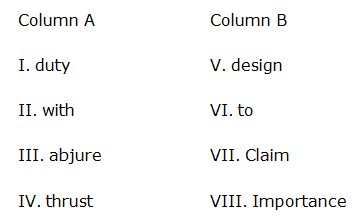 4) The penalty may be mild, but its import is quite grave. In imposing a nominal fine of one rupee on advocate Prashant Bhushan for criminal contempt of court, and, in the event of default, asking him to serve a three-month simple prison term and be cancelled for three years from legal practice, the Supreme Court has bared its dark, intolerant side. 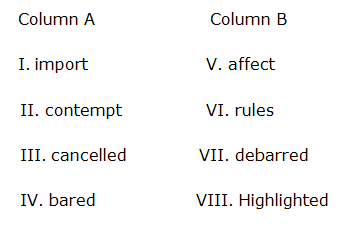 5) If the judiciary’s majesty, dignity and trustworthiness were indeed the values at stake, it would have been far more commendable for the Court not to have taken up this matter on its own motion. 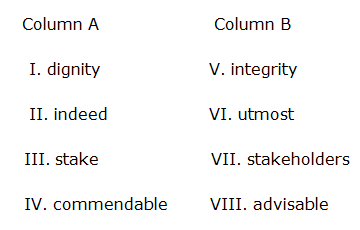 Directions (6-10): In this question, a part of the sentence is made bold. Below are given alternatives to the bold part at (A), (B), (C) and (D) which may improve the sentence. Choose the correct alternative. In case no replacement is needed, mark (E) as your answer.

6) This proceeding was fated to shine a light on the Court’s conduct ratheron the actions of the contemnor.

7) The Court, in its order, did take cognisance of the multiple threats in the industry’s well-being.

8) In the euphoria surrounding the great Indian victory, some grim facts should be overlooked.

9) In a State that resisted multiple attempts in impose Hindi since 1937, political parties are understandably wary of any mandate to impart an additional language in schools.

10) India’s federal nature and diversity demands in regional languageis given supremacy over another.

‘Clinical’ means either “study relating to medical treatments or something/someone with higher efficiency”. Both these meanings are contextually incorrect in above sentences. Therefore, option C is the correct answer.

The idiom “the sword of Damocles” means ‘impending disaster or something bad is going to happen”. To this context ‘same as’ and ‘with’ are grammatically and contextually incorrect and needed to be replace by ‘like’ and ‘above’ respectively to fulfill the meaning of the hanging sword. Therefore, option D is the correct answer.

The word ‘duty’ should be replaced with ‘design’ to make a meaningful context with the following point, “and manufacture of indigenous tugboats”. Since, the sentence begin with ‘from’ there must be a conjunction ‘to’, which was missing as places as ‘with’ making the sentence grammatically incorrect. Therefore, option A is the correct answer.

The term ‘cancelled’ is contextually incorrect should be replaced with ‘debarred’ meaning “to prohibit”. Therefore, option C is the correct answer.

The word ‘commendable’ means ‘praiseworthy’, which is contextually incorrect with this statement and should be replaced with ‘advisable’ to make things meaningful. Therefore, option D is the correct answer.

Use of ‘than’ after ‘rather’ is grammatically correct.  Therefore, option A is the correct answer.

The preposition ‘in’ is contextually incorrect and should be replaced by ‘of’. Therefore, option A is the correct option.

The sentence implies a concern amidst of happiness. Only option B is grammatically and contextually correct in positioning of the word ‘not’. Therefore, option B is the correct answer.

The use of ‘to’ between ‘attempts’ and ‘impose’ is grammatically meaningful and hence, contextually correct. Therefore, option C is the correct answer.

The replacement “demand that no regional language” serves both contextuallyand grammatically correct with context meaning of the sentence. Therefore, option D is the correct answer.