Direction (1-3): Study the following information carefully and answer the questions given below it.

1) What is the position of N with respect to point M?

2) What is the position of point G with respect to Rinku?

3) What is the shortest distance between point G and point N?

Direction (4): A statement is given followed by six statements that speak further on the same theme and context. Read the statements and answer the questions that follow:

4) Bangalore, with its perennial supply of drinking water from the River Cauvery, may be the envy of many, particularly the residents of Chennai Who face a serious drinking water shortage for most parts of the year. But then, nothing much is being done in Bangalore to conserve this water. The massive wastage in the water supply lines maintained and managed by the Bangalore Water Supply and Sewerage Board.

I) Commercial establishments are dependent on ground water since the Water supply rates of the BWSSB for non-domestic use are unrealistic.

II) Leakages should be measured in the micro areas and actions should be taken to reduce leakages through improvement of networks, detecting illegal connections and plugging physical water leakages.

III) Bangalore is one of the few cities in the country with an assured drinking water supply from the River Cauvery although there are many challenges given the city’s elevation.

IV) BWSSB should undertake a large number of activities to sensitise consumers and also train engineers at various institutions towards conserving the water.

V) If this continues, Bangalore will run out of ground water in a few years so it must call for efficient management of water resources

VI) Efforts should be made in treating and supplying recycled water for non-drinking purposes like construction of a sewage treatment plant with dual piping system–one for recycled water and other for fresh water supply.

Which of the following are the possible courses of action to tackle the given situation?

I) The amendment will widen the scope to cover litigation pending in various debt recovery tribunals and reduces the litigation related to direct taxes.

A.If only assumption I is implicit

B.If only assumption II is implicit

C.If either I or II is implicit

D.If neither I nor II is implicit

E.If both I and II are implicit

Direction (6): A statement is given followed by five statements that speak further on the same theme and context. Read the statements and answer the questions that follow:

6) Ever since the defence sector was opened up for private investment, the expectation has been that it will become a major contributor to the ‘ Make in India’ initiative. The public sector’s ability to meet the demand gap is theoretically superior to that of the private sector.

A.The inability of a public sector to meet the demand creates the opportunity for a more efficient and a more customer friendly private sector to move in.

B.It would be different if private investment in defence production was purely market-driven and under conditions of fair global competition.

C.Public sector is effectively insured against market uncertainties and does not have to incur any ‘marketing’ costs.

D.Newer technologies could make products out-dated unable to match with what the enemy may have acquired.

7) Statement: An umbrella programme for roads – Bharatmala – will hit the ground soon ending all existing highway projects, including the flagship NHDP, in six months.

I). The development of any nation depends on the transportation networks and the ways in which they are being maintained. For connecting the areas and maintaining smooth flow of traffic, the construction of new and developed roads is a must.

II). This project will compete directly with some of the existing toll road projects, affecting their toll collection, and, consequently, debt servicing ability. This is a big hindrance in economic development and leads to inefficiency in the transportation of goods and services across the country.

C.If either I or II Strong

D.If neither I nor II is Strong

E.If both I and II are Strong

Direction (8-10): There are five 4-digit numbers preceded by 4-letter word as given below. Answer the following questions based on these numbers.

8) If ‘S’ is added before each 4-letter word then, how many meaningful new words can be formed?

9) If all the numbers within the 4-digit numbers are rearranged in ascending order from left to right, then how many letters are there between 2nd letter from right end of the words followed by lowest and second highest number after rearrangement according to alphabetical order?

10) If 1st and 3rd & 2nd and 4th digits within the 4-digits numbers are interchanged then which of the following number yields second lowest number? 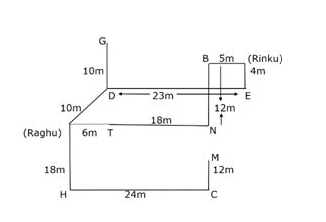 The given statement is talking about the wastage of surface water and nothing being done to conserve this water. So, to deal with this situation, government has to take measures like taking actions to reduce leakages, sensitizing pubic to conserve water and supplying recycled water for non- drinking purposes. Therefore, statements 2, 4 and 6 are the possible courses of action to be taken. All other sentences are not talking about the measures to tackle the situation.

The given statement is talking about the defence sector which opened for private investment. It is saying that the public sector’s ability to meet  the demand gap is theoretically superior to that of the private sector; which means that demands are not fulfilled by the public sector. So, it can be assumed that due to the inability of public sector, it creates the opportunity for a more efficient and a more customer friendly private sector to move in.

The given statement is talking about the project that is aimed at increasing the road connectivity in the country. Therefore, only argument 1 is implicit as it is true that the development of any nation depends on the transportation networks and for connecting the areas and maintaining smooth flow of traffic, the construction of new and developed roads is necessary.