RRB Group D Result, after the 1st Stage of Computer Based Test (CBT) is completed, candidates wait eagerly for their Railway Group D result, which usually is released after few days of the exam, this page contains the steps wise process, a candidate must to follow to view his/her result. RRB(Railway Recruitment Board) announced the test dates of RRB Group D Exam for recruiting 103760+ vacancies, CBT(COMPUTER BASED TEST) will be conducted by ECA(Exam Conducting Agency) for Various Posts from 15 Dec 2020 across  test centers in India.

The RRB(Railway Recruitment Board) officially announces the Railway Group D result on the official website of respective Regional RRBs.

The RRB Group D result is released in PDF format and candidates can login to their respective Registered Accounts to check their result, which can also be downloaded for Future references. Candidates have to follow the below-mentioned steps in order to check their RRB Group D Result.

The RRB Group D result PDF contains the roll numbers of candidates shortlisted. The other details mentioned in the RRB Group D scorecard are as follows: 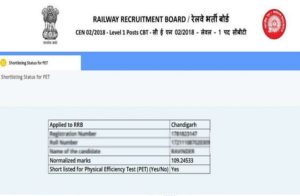 PET( Physical Efficiency Test)  is qualifying in nature but it is mandatory for candidates to pass the test.

PET test is qualifying in nature but it is mandatory for candidates to pass the test. Candidates 3 times the number of vacancies are called for the RRB Group D PET test based on their performance in the CBT exam.

Q1. From where can a candidate check his/her result for RRB Group D Exam?

Ans. After the Official Cut-off has been released by RRB, candidates can then visit the official website of their respective Regional RRB to check the cut-off of their Regions.

Q2. Who to Check the result if a candidate is from Jammu Region?

Ans. Candidates from Jammu can check their result from their respective Regional RRB Websites

Ans. Candidates can download the admit card online from the respective official websites of RRBs by entering user ID and password.

Q4. What are the things a candidate must know to access their Railway Group D result?

Ans. The Candidate must Know their Regional RRB Websites(refer above table) and their Registration Number to access their RRB Group D result.