Directions (1-2): In the questions below are given some conclusions followed by five sets of statements. You have to choose the correct set of statements that logically satisfies given conclusions definitely .Assume the given statements to be true even if they seem to be at variance from commonly known facts.

Some dark is white.

Some black is not white.

(a) Some black is green. No green is white. Some white is fair. All fair is dark. No dark is violet.

(b) Some black is white. All white is green. No green is fair. Some fair is dark. All dark is violet.

(c) Some fair is dark. All dark is violet. No violet is black. Some black is white. All white is green.

(d) Some fair is violet. All violet is dark. No dark is black. All black is white. Some black is green.

Some wind is air.

Some air is sky.

(a) Some sky is air. All airs are blue. Some blue is tree. All trees are wind. Some trees are nose.

(b) Some sky is tree. All trees are wind. Some wind is nose. All noses are blue. Some blue is air.

(c) Some sky is nose. All noses are blue. Some blue is air. All airs are tree. Some tree is wind.

(d) All sky is blue. Some sky is air. Some air is tree. All trees are wind. Some wind is nose.

3) Read the passage given below and select the inference(s) that hold true based on the facts in the passage.

Passage: That truth matters to science is hardly news. For a long time, people have looked to science for truths about the world. The Scientific Revolution was nothing if not the triumph of Galileo’s scientific truth – hard-won through his telescopic observations – over centuries of dogma about the geocentric system. With its system of epicycles and deferents, Ptolemaic astronomy was at once sophisticated and false. It served to, at best, ‘save the appearances’ about how planets seemed to move in the sky. It did not tell the truth about planetary motion until the discovery of the Copernican explanation.

I). Science is based and works on truth.

III). Copernican explanation uncovered the fallacy of Ptolemaic astronomy and the truth about planetary motion.

A) Only inference I is true.

B) Only inference II is true.

D) All of them are true.

E) None of them is true

Directions (4): Read the passage given below and choose the correct option.

4) Passage: In a recently published report on the condition of health of women in India, it is reported that while sanitation in urban houses has improved by 70%, in rural areas, still unsanitary habits contribute greatly towards malnutrition which has retarded the growth of 50 million children in our country. 70% of the health-related problems faced by the children of primary schools are due to insufficient sanitation. Polluted air and unsanitary habits result in disease through which approximately 4 lakhs children die every year.

Assumption: India’s poverty is responsible for the spreading of disease.​

A) If the assumption is definitely true.

B) If the assumption is probably true.

C) If the assumption is definitely false.

D) If the assumption is probably false.

E) If the data are inadequate.

5) Passage: Pollution amounts to slow murder. Regular exposure to industrial and vehicular pollution leads to life-threatening diseases like asthma, heart problems, cancer and various other disorders. Therefore, nobody has the right to pollute, rich or poor. Industrial and vehicular pollution is growing rapidly across the country. It is not just the metropolitan centre’s that are heavily polluted today but also small and medium towns. Pollution is growing faster than the economy. This is because the western technological model, built on heavy use of energy and materials, is an inherently highly toxic model. It produces huge amounts of toxic pollution, which can be controlled only if there is a careful choice of technology and there is considerable discipline in its use.

Assumption: The pollution level in the western world is considerably more than that in India.​

A) If the assumption is definitely true.

B) If the assumption is probably true.

C) If the assumption is definitely false.

D) If the assumption is probably false.

E) If the data are inadequate.

Directions (6-10): Study the following information carefully to answer the given questions.

A number arrangement machine when given an input line of numbers rearranges them following a particular rule in each step. The following is an illustration of input and rearrangement. 6) What is the sum of numbers obtained in Step 3?

8) What is the difference between the numbers obtained in step 4 and step 5?

9) Which of the following number is obtained in the penultimate step?

10) Which of the following is the second highest number in step 2?

The entire passage implies that science is governed by truth. Hence, inference I is true. The words ‘triumph’ and ‘over’ in the third statement suggests that Galileo’s scientific truth did help deprecate or devalue the geocentric system i.e. the Ptolemaic astronomy. Hence, inference II is also true. The last line in the passage says that Copernican explanation told the truth about planetary motion and uncovered that Ptolemaic astronomy was false. So, inference III is also true. Therefore, option d is the correct answer.

Option c is the correct answer. The passage talks about how unsanitary methods contribute to the deaths of approximately 4 lakh children every year. It does not mention poverty at all. Hence, the assumption is definitely false.

Option e is the correct answer. It is possible that Western countries practice discipline in the use of technology and choose it carefully. So nothing can be assumed about the pollution level in the western world on the basis of the given passage. Data are inadequate.

Step 3: Difference between 1st and 3rd number with 2nd and 4th number respectively. A large number is subtracted with a small number. 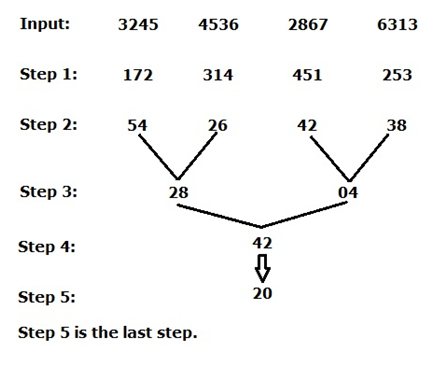