Dear Aspirants, Our IBPS Guide team is providing new series of Reasoning Questions for RRB PO Prelims 2021 so the aspirants can practice it on a daily basis. These questions are framed by our skilled experts after understanding your needs thoroughly. Aspirants can practice these new series questions daily to familiarize with the exact exam pattern and make your preparation effective.

Direction (1-3): In each of the following questions, the relationship between different elements is shown in the statements followed by two conclusions. Find the conclusion which is definitely true.

a)If only conclusion I follows.

c)If either conclusion I or II follows.

d)If neither conclusion I nor II follows.

Direction (4-5): Study the following information carefully and answer the below questions.

4) In which direction is point E with respect to point A?

Direction (6-9): Study the following arrangement carefully and answer the questions given below.

6) How many such symbols are there in the above arrangement each of which is immediately preceded by a vowel and immediately followed by a number?

7) How many such numbers are there in the above arrangement each of which is immediately followed by a number and immediately preceded by a consonant?

8) If all the symbols are dropped from the given arrangement, then which of the following element is 7th from the right end?

9) Which of the following element is seventh to the right of sixth element from the left end?

10) How many such pairs of letters are there in the word ‘NOTEBOOK’ each of which has as many letters between them as they have in the English alphabetical series (both forward and backward direction)? 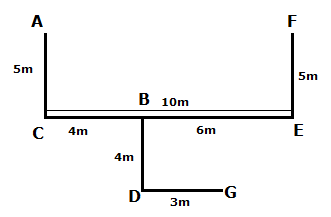