Eight persons- P, Q, R, S, T, U, V, and W are working in the four-floor building. The lowermost floor is one and the topmost floor is four. Each floor has two flats Viz flat1 and flat2. Flat1 is west of Flat2. All the information is not necessarily in the same order.

1) Who among the following person is works in flat2 on the fourth floor?

B.The one who works immediately above W

C.The one who works on the same floor of T

2) Which of the following statement is/are true?

I). One floor is between Q and W

III). U and V work in the same flat

E.None of the statement is false

3) How many persons are working above T including both flats?

4) On which of the following floor and flat does U work?

5) Which of the following combination of the persons are working on the same floor?

6) If point H is west of point P and south of point X. Then what is the shortest distance between H and S?

8) What is the direction of T with respect to N?

Direction (9-10): Following questions are based on the five words given below:

9) If the positions of the first and the third alphabet of each word are interchanged, how many meaningful words will be formed in the new arrangements?

10) If the words are arranged in the order as they would appear in a dictionary from left to right, which of the following would be third from the right? 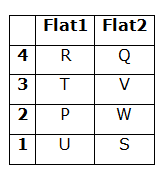 P works in the flat which is south of R.

P does not work on the adjacent floor of R. 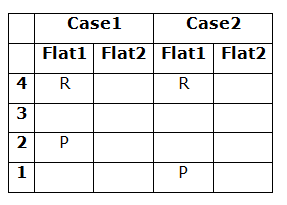 Q works in the north-east flat of P.

U works in the south-west flat of W.

Neither U nor Q works on the same floor.

From the above condition, case2 gets eliminated. 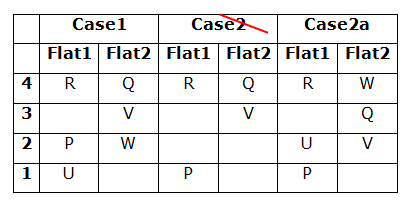 Neither T nor S works on the same floor as P.

U and S are not working in the same flat.

From the above condition, case2a gets eliminated. Case1 shows the final arrangement. 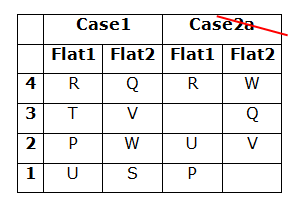 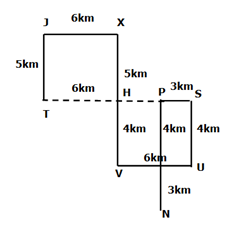