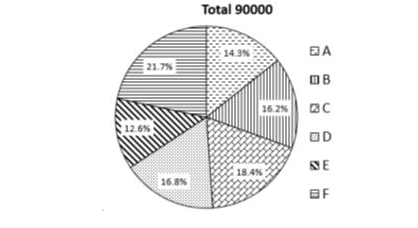 1). What is the total number of M2 cars sold in all cities together?

2). What is the difference between M1 cars sold in city D and city E?

P X Q means P is not smaller than Q

P – Q means P is neither greater nor smaller than Q

P + Q means P is not greater than Q

Now in each of the following questions, assuming the given statement to be true, find which of the two conclusions I & II given below them is/are definitely true. Give answer

a) If Only Conclusions I follows

b) If Only Conclusions II follows

c) If either Conclusions I or II follows

d) If neither Conclusions I nor II follows

e) If both Conclusions I & II follows

Directions (Q. 11-15): In each of the following sentences there is a blank apace given. Below each five words have been denoted by numbers (A), (B), (C) and (D). find out which two words can be filled up in the blank alternatively to make the sentence meaningfully complete.

11). The company would supply tanker water to colonies and commercial establishments and would distribute packaged drinking water at _______ rates.

12). India is a country where most people are between 18-30 years of age and there is an urgent need to _______ this energy in the right direction.

14). The laser guided machine _______ an agricultural piece of land accurately so that there is no accumulation or draining out of water.

15). Compared to other nations, we have a training progress rate which can be increased if the intellectuals and educated mass contribute to the welfare of the _______ from the grassroots level.