Directions (1 – 5): The given bar graph shows the sales of three different products of different stationery companies for the year 2010 – 2011.

The table shows the percentage of users of these products who are school goers. 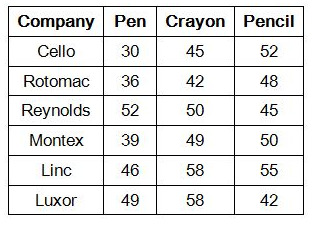 3). Find the number of school goers who uses pens from Reynolds?

4). Find the total number of users other than school goers who uses pencils of all six companies?

6). Statements: Some Shoes are Socks. Some Sandals are Socks. All Socks are Ties. All Ties are Belts.

Conclusions: I. Some Shoes are Belts. II. Some Sandals are Ties. III. Some shoes are Sandlas. IV No shoe is Sandal

7). Statements: All rice are wheat. Some wheat are maize. Some Maize are corn. All corn are jowar.

Conclusions: I. Some Maize are jowar. II. Some corn are whear. III. Some wheat are rice. IV. No tice is is jowar.

8). Statements: Some sweets are sour. Some sour are bitter. Some bitter are food. Some food is spicy.

9). Statements: Some planes are curves. All curves are dimensions. No dimension are arcs. Some arcs are not angles.

Conclusions: I. Some planes are not angles. II. No plane are arcs. III. No curve are arcs. IV. No arcs are dimensions.

10). Statements: Some tanks are banks. All banks are thanks. All thanks are ranks. Some ranks are blanks.

Directions (Q. 11-15): Rearrange the following six sentences A, B,C, D, E and F in a proper sequence to form a meaningful paragraph. Then answer the questions given below.

(A)   we will find some one who won’t care how you look either, or how anyone would look, if only there is the personality fit.

(B)    You need a girl who is a personal, emotional and temperamental fit to you.

(C)  If we can’t find the fit in this group, we will look elsewhere.

(F)   If that happens looks are less important.

11). Which of the following should be FIRST statement after rearrangement?

12). Which of the following should be SIXTH statement after rearrangement?

13). Which of the following should be FOURTH statement after rearrangement?

14). Which of the following should be THIRD statement after rearrangement?

15). Which of the following should be FIFTH statement after rearrangement?