Direction (1): In the following question, select the word which cannot be formed using the letters of the given word.

2) How many triangles are there in the given figure?

3) How many quadrilaterals are there in the given figure?

I) All men are scholars.

II) Some scholars are advocate.

I) All scholars are men.

II) Some men are advocate.

III) No men are advocate.

I) Some men are hardworking.

II) No blue is a advocate.

III) Some blue are men.

I) Some blue are hardworking.

II) Some men are advocate.

III) Some blue are not hardworking.

IV) Some men are not advocate.

Direction (6-7): From the given options, which answer figure can be formed by folding the figure given in the question? 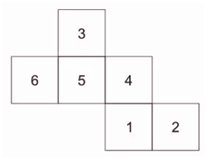 8) In the given figure, which letter represents electronic mixer which is white?

9) In the given figure, which number represents yellow capsicum which is not rotten? 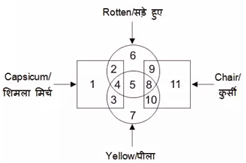 10) In the given figure, what is the total of strong blades and sharp steel?

Only IV and either I or III follows.

∴ Option (b) can be formed.

Option (c) can be formed.

3 represents yellow capsicum which is not rotten.