II) No plate is spoon.

III) Some spoons are pens.

Conclusions: I) Some pens are cups.

II) Some cups are spoons.

III) No cup is spoon.

IV) Some pens are not cups.

II) No pencil is eraser.

III) Some cups are erasers.

Conclusions: I) Some cups are not pencils.

II) Some cups are not pens.

III) Some pencils are not cups.

IV) No pen is eraser.

Direction (6-7): From the given options, which answer figure can be formed by folding the figure given in the question ?

8) In the given, which number represents poisonous insects which are not black?

9) In the given figure, which alphabet/alphabets represent old cars?

10) In the given figure, how many metallic balls are also heavy? 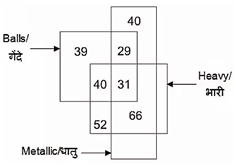 Only conclusion I, II and IV follows.

Option (a) can be formed.

Option (b) can be formed.

2 represents poisonous insects which are not black.