2) How many rectangles are there in the given figure?

3) How many triangles are there in the given figure?

I) Some clothes are white

II) Some white are flags.

III) No flag is straight.

II) Some white are straight

III) Some flags are clothes.

I) All pages are yellow.

II) All yellow are newspaper.

III) Some newspapers are national.

I) Some national are yellow.

II) Some newspapers are pages.

III) No page is national.

7) Three position of a cube are shown below.

9) In the given figure, how many big bottles are not blue?

10) In the given figure, how many colour televisions are not wide? 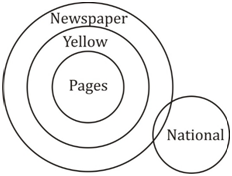 37 big bottles are not blue

18 colour televisions are not wide.