World Air Quality Report 2020 India Rank is 3rd Most Polluted Country across the world. According to the report, South and East Asian countries continue to be the most polluted locations in the world. 37 out of 40 most polluted cities in 2020 are in South Asia. World Air Quality Report 2020 India Rank and the cities in India with major pollution are given below. Air Pollution causes a loss of 7.4% of South Asia’s GDP. 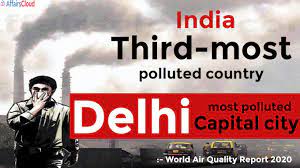 This combines with other pollutants to rank India as the world’s third greatest producer of greenhouse gases, behind China and the USA. The Air (Prevention and Control of Pollution) Act was inaugurated in the early ‘80s but has failed to make an impact due to the poor enforcement of the rules.

Can India’s air quality be improved?

“The year 2020 brought an unexpected dip in air pollution. In 2021, we will likely see an increase in air pollution due to human activity, again,” said Frank Hammes, CEO of IQAir.

“We hope this report will highlight that urgent action is both possible and necessary to combat air pollution, which remains the world’s greatest environmental health threat.”