An acquisition is when one company purchases most or all of another company’s shares to gain control of that company. Purchasing more than 50% of a target firm’s stock and other assets allows the acquirer to make decisions about the newly acquired assets without the approval of the company’s shareholders. Section 44A of the Banking Regulation Act of 1949, which states that no banking companies shall amalgamate unless a scheme of such amalgamation is required to be approved by a two-thirds majority of shareholders of each amalgamating company. Check the aim, merits, demerits, and more info regarding the list of bank mergers in India.

Here are the merits of bank mergers in India.

These are the demerits of bank mergers in India.

Here is the list of bank mergers in India in the table. You can use it for competitive exam preparations.

Bank Merging conversations have consequently talked by our finance ministry from a few months before. Most of our public sector banks have got a lot of Non-Performing Assets (NPA) and run out of profit. Meanwhile, the expenses have overtaken the desired revenue for a lot of banks. In order to avoid bankruptcy, our union cabinet has planned to merge our public sector banks.

The merger is important for consolidation and expansion purposes. Mergers have provided great results in terms of saving the weak banks which are going to be crucial in meeting their expectations. The merger will help to create a stronger institution and thereby leading to the institution’s efficiency & stronger balance sheet. Along with that, it will rationalize some important parameters like expenses including branches, employees, technology, etc. 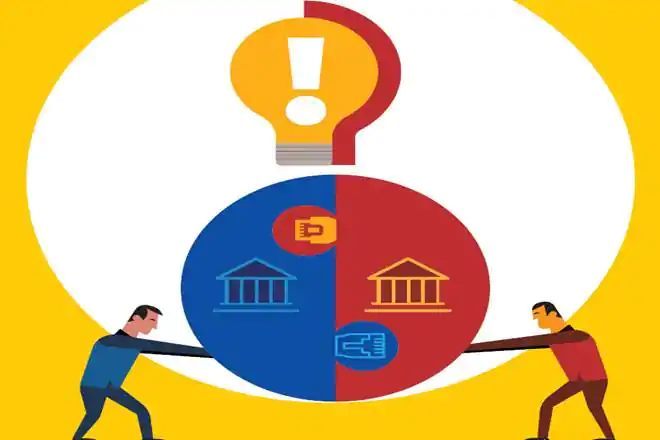 The Mergers are aimed at creating Global Sized Banks in India.

Cabinet Approval on List of Bank Mergers in India:

To consult the above points with our top banking higher officials our Union cabinet Finance Minister Nirmala Sitharaman said the exercise of consolidation of 10 public sector banks (PSBs) into a large four state-owned banks is ahead and the merger will come into effect from 1 April 2020.

The Union Cabinet has given a go-ahead for the merger proposal and the government has been in regular touch with these banks.

As per the bank amalgamation plan,

In 2017, There were as many as 27 PSBs in India. Now it will be seven large public sector banks (PSBs), and five smaller ones.

The merger would result in the formation of seven large Public Sector Banks with each merged entity having a business of over Rs 8 lakh crore.

Greater scale and cooperation through the merging would lead to cost benefits which should enable the Public Sector Banks to strengthen their competitiveness and provides a positive impact on our Indian banking system.

Example of the Positive Impact on the list of Bank Mergers in India:

The government has amalgamated five associate banks of SBI and Bharatiya Mahila Bank with the State Bank of India. Similarly Last year, Dena Bank and Vijaya Bank were amalgamated with Bank of Baroda.

Sitharaman said, By the amalgamation of Dena Bank and Vijaya Bank with Bank of Baroda,  the operating profit has improved and retail loans are now sanctioned from 23 days into 11 days.

List of Bank Mergers in India – Business Size of our Top PSBs:

Here are some FAQs regarding the list of bank mergers in India.

Q: What are the 12 banks after merger?

Q: How many PSBs are there in India?

A: After the Public sector bank mergers in India, there are a total of 12 PSBs.

Q: Which is India’s largest bank?

A: HDFC is India’s largest bank. It is a private sector bank.