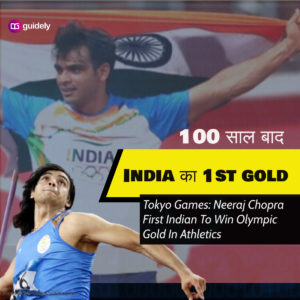 Neeraj’s gold took India’s medal count to 7 at the Tokyo Olympics 2020. The 23 years Neeraj satisfied many of the Indian’s dreams to win Gold Medal For India In Olympics 2021. He is a role model for today’s youth. He made us all proud with his incredible performance. As of now, 7 medals were bagged by India with 2 Silver medals and 4 bronze medals, and 1 Gold medal.

Check out the list of medals won by India in today’s Olympics till 7th August 2021 provided below. Mirabai Chanu won the first medal for the country with silver. Now, Neeraj has created history with his tremendous performance in the qualifying as well as the final round in the Tokyo Olympics 2020 by winning the First Gold Medal For India In Olympics 2021.

India won a total of 7 Medals on 7th August 2021. With this medals list, India stands at the 47th position. It surpassed the total 6 medals winning in London Olympics. China Stands first in the medal tally with a total of 87 medals. The United States of America is in the second position followed by Japan.