RRB ALP Stage 1 Exam Fee Refund Status: Railway Recruitment Board has announced the refund of application form for the appeared aspirants. Also, many of the fees refunds was failed. So, the board is creating the opportunity for aspirants to fill valid Bank details. Further, the board announced that the link will avail from 18th December 2018. Now, many refunds are still in the list for RRB ALP Exam Fee Refund. So, RRB announces that the aspirants can enter the bank details from the link will avail from 21st December 2018. Also, aspirants can check their refund status still 20th December 2018. To know further information about RRB ALP Exam Fees Refund aspirants can check the below details.

RRB ALP CBR 1 Exam fee Refund: RRB ALP CBR 1 Exam fee refund!!! Railway Recruitment Board had recently released an official notification about the fee refund for RRB ALP 1st stage. Candidates those who had attended the RRB ALP Stage 1 exam 2018 which was conducted on September month. RRB Recruitment board recently released the notification for the enrollment of Assistant Loco Pilot and Technicians around 64,371 vacancies. A lot of aspirants had attended the RRB ALP Stage 1 exam and eagerly waiting for the result.  Result for ALP was rescheduled from November 02nd. But yet now the recruitment board does not announce the revised result date. In the meantime now they officially announced the refund of RRB ALP Exam fee. 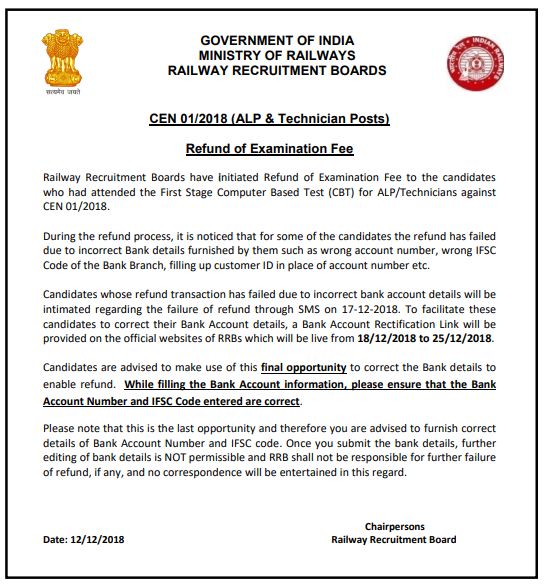