Direction (1-5): Following questions are based on the five three-digit numbers given below.

1) If all the digits in each of the numbers are arranged in ascending order within the number, then which of the following number is the highest number?

4) If the position of the second and the third digits of each of the numbers are interchanged, then how many odd numbers will be formed?

5) If one is subtracted from each of the numbers, then how many numbers thus formed will be divisible by 4?

6) In a row of 50 students facing south direction, N is 18th from the left end and O is 17th from the right end. Then how many students are between N and O?

9) If the letter of the word “Employee” is arranged in alphabetical order from left to right, then which letter would be third from the right end?

10) If in a number ‘1367543286’ two is added in each odd digit and two is subtracted from each even digit after that arrange it in ascending order from left to right. After the operation which of the following digit will be fifth from the right end?

After the arrangement, 2ndnumber from the left end is – 576

3rd digit of the highest number is – 5

2nd digit of the lowest number is – 2 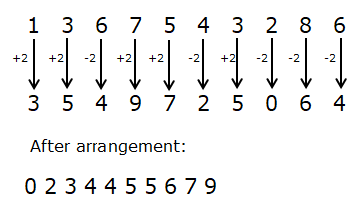