Directions (1-5): Study the following information carefully and answer the questions given below.

When a word and number arrangement machine is given an input line words and number, it arranges them following a particular rule. The following is the illustration of input and re-arrangement.

And Step V is the last step of the rearrangement of the above input.

As per the rules followed in the above steps, find out in each of the following questions the appropriate steps for the given input.

1) Which of the following statements is true?

D) Six steps are required to complete the above arrangement

E) None is true

2) How many elements are there between DD2 and wonder in step III?

3) Which of the following elements is second to the left of third from the right end in second last step?

6) Statement I: Aadhaar card holders can link their UID with mobile number or SIM from the comfort of their home. “No need to give finger prints to local SIM card retailer for your mobile phone verification.

Statement II: Under one-time PIN-based authentication, an OTP with a limited-period validity is sent to the mobile number and/or e-mail address of the Aadhaar number holder registered with Aadhaar.

C) Both statement I and II are independent cause

7) Statement I: Due to the nature of physical payment instruments, cheque processing is a manual and labour intensive process, requiring complex logistics and manpower to move the vouchers through the system and manually clear them at a country’s clearing house.

Statement II: Fortunately, banking institutions have started employing electronic cheque conversion processes to allow electronic settlement, thus reducing the number of physical cheques that flow through the payment system in a bid to eliminate paper from the system altogether.

C) Both statement I and II are independent cause

Direction (8-10): Study the following information carefully and answer the questions given below:

In a certain code language,

8) How will ‘Trained manager’ be coded in that language?

10) How will ‘Members’ be coded in that language?

Words are arranged in ascending order with respect to special patterns which is explained below.

Comfortable is coded as MG4.

Second letter represents Number of consonants in a word without repeating any letter.

Number represents Number of vowels in a word.

Numbers are arranged in ascending order with respect to multiplication of two digits in a number.

Code for Trained will be –

For the first Letter-Middle letter in trained is I. Opposite letter of I is R.

Code for Manager will be –

For the first letter-Middle letter in manager is A. Opposite letter of A is Z

So 13ZS code will be endeavour

Code for endeavour will be –

For the first Letter-Middle letter in endeavour is A. Opposite letter of A is Z.

Code for Members will be –

For the first Letter-Middle letter in members is B. Opposite letter of B is Y. 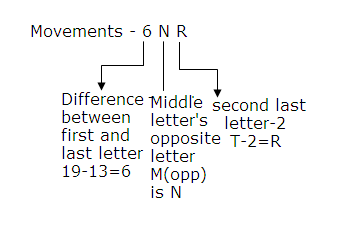