Dear Aspirants, Our IBPS Guide team is providing new series of Reasoning Questions for SBI PO 2020 Prelims so the aspirants can practice it on a daily basis. These questions are framed by our skilled experts after understanding your needs thoroughly. Aspirants can practice these new series questions daily to familiarize with the exact exam pattern and make your preparation effective.

Direction (1-3): Study the following information carefully and answer the below questions

A family consists of eight members. There is no single parent. L is the father-in-law of R who is the only daughter of M who is the father of X. P is the maternal grandmother of O who is the son of T who is not a female. T is the opposite gender of V.

1) Who among the following is the paternal grandmother of O?

2) How many male members are in the family?

3) How many married couples are in the family?

4) How many such pairs of letters are there in the word “THUNDER” each of which has many letters between them in the word as in alphabetical series (both in forward and backward direction)?

5) If in the word “CONTEMPLATING” all the letters are converted to its corresponding number in the English alphabet, then what will be the result if all the values are added together irrespective of the repeated values?

In the car showroom, some cars are standing at a certain distance. BMW is 15m south of Toyota which is 18m west of Audi. Volkswagen is north of Jaguar which is 16m east of Audi. Ford is 12m north of Audi and is west of Volkswagen.

6) If Suzuki is standing exactly between the Volkswagen and Jaguar, then what is the direction of Suzuki with respect to BMW?

7) If Audi and Toyota interchange their positions and Volkswagen and Ford did the same, with respect to the new positions, what is the shortest distance between Ford and Toyota?

8) Whichof the following cars is to the west of Ford?

B.The car is to the North of BMW

C.The car is to the West of Jaguar

Direction (9-10): Study the following information carefully and answer the below question:

9) How many companies are ranked between Tata and Maruthi?

E.Other than the given option

10) What is the rank of Honda in the list from the top? 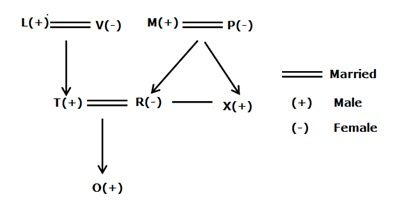 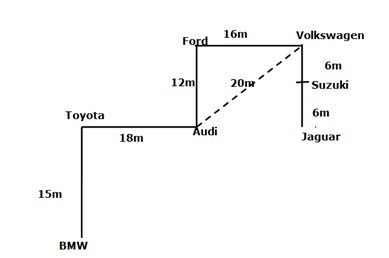 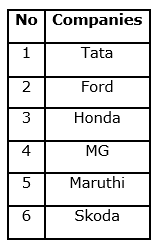