Dear Readers, IBPS Clerk Examination for the year 2017 was approaching very shortly, for that we have given the Sectional Online Test Series which consist of questions from all the three sections such as, Quantitative Aptitude, Reasoning Ability, and English Language. This Sectional Test Series will be provided on daily basis kindly make use of it.

Number & Percentage of Candidates Qualified in a Competitive Examination: 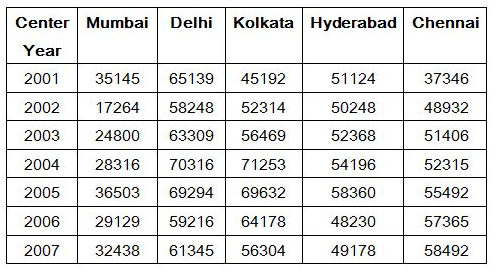 Approximate Percentage Of Candidates Qualified To appeared in the

Competitive Examination From Five Centres Over the year 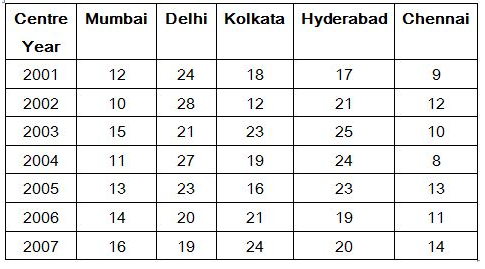 1). In which of the following years was the difference in number of candidates appeared from Mumbai over the previous year the minimum?

2). In which of the following years was the number of candidates qualified from Chennai the maximum among the given years?

3). Approximately what was the total number of candidates qualified from Delhi in 2002 and 2006 together?

4). Approximately how many candidates appearing from Kolkata in 2004 qualified in the competitive examination?

5). Approximately what was the difference between the number of candidates qualified from Hyderabad in 2001 and that in 2002?

Directions (6 – 10): Read the following information carefully and answer the questions that follow:

6). Who is from Darjelling?

7). The one who is having birthday in February is from which city?

8). How many months are there between birthday months of D and E as months given in arrangement?

9). The one from Shimla has his birthday in month

10). Which of the following triplet is incorrect?

11). He faced the music for reporting to his boss late.

12). If we give him this concession, it will be the thin end of the wedge.

13). Enemy soldiers fell upon the platoon as soon as it crossed the border.

14). The manager fought tooth and nail to save his firm.

15). The pedestrian had a hair-breadth escape from a street accident.