1) On the occasion International Day of Yoga, Minister of State for Education has launched NIOS Diploma course in Yogic Science. What does O mean in NIOS?

2) In which of the presidential election,Ebrahim Raisi became the President of Iran after been competing with seven candidates?

3) The world’s third largest high quality diamond weighing 1098 carats has been found in Jwaneng mine of which Country?

4) How much amount has been allotted by Odisha CM under the Ashirbad schemefor children who have sent to children’s home in the absence of a caregiver?

6) Recently,who among the following has got the extension of tenure period for 2 years as a Whole time Member of SEBI from the Central government?

7) The Prestigious Central European University Open Society Prize was given to a Former Kerala Health Minister, KK Shailajain which among the following city?

8) On the occasion of International Day of Yoga, Prime Minister Narendra Modi has launched a mobile app called mYoga. The app can be now available in which of the following foreign languages?

9) As per the Ease of living index 2020, whichamong the following city has scored the highest in the parameter of quality of life?

10) As per the World Investment Report 2021, India has become the fifth largest recipient of Foreign Direct Investment. This report was published by which among the following?

11) Who among the following has authored the book titled “The Nutmeg’s Curse: Parables for a Planet in Crisis”?

12) Guruprasad Mohapatra,the secretary of which of the following organization, has passed away recently?

Minister of State for Education Shri Sanjay Dhotre launched National Institute of Open Schooling (NIOS) Diploma course in Yogic Science on the occasion of International Day of Yoga. The Minister released the self-instructional material of the course.

The course in Yogic science launched will help those who pass out of the course to become a job provider rather than a job seeker.

Hardliner Ebrahim Raisi is set to become Iran’s president after a partial counting of the votes revealed a significant lead for him after presidential elections.

Ebrahim Raisi, is an Iranian conservative and principlist politician and Muslim jurist who is the president-elect of Iran, having been elected in the 2021 Iranian presidential election. He is Chief Justice of Iran from 2019.

A huge diamond weighing more than 1,000 carats, which could be the third-largest mined in history, has been discovered in the southern African country of Botswana.This diamond believed to be the third largest ever found has been put on display in Botswana.

Odisha Chief Minister Naveen Patnaik has launched the Ashirbad scheme on Father`s Day.Under this scheme, the government will give Rs 2,500 per month to every child who has lost one or both of his parents.

The Centre has extended the tenure of appointment of Ananta Barua as Whole-time Member (WTM) of the Securities and Exchange Board of India (SEBI) for a period of two years beyond July 31.

Prior to joining SEBI, he had worked with IFCI from 1990. He was also advisor at the Bahrain Monetary Agency and Central Bank of Bahrain between 2004 and 2006.

The Centre has extended the tenure of appointment of Santosh Kumar Mohanty as SEBI Whole-time Member by two more years.

Former Kerala Health Minister, KK Shailaja , was awarded this year’s Central European University Open Society Prize. The prestigious international honour given by CEU was awarded at a ceremony in Vienna.

The award, the university’s highest honour, was presented to her in recognition of “her determined leadership and community-based public health work, saving lives during the pandemic” at a virtual convocation, with students joining from all over the world for the university’s 30th Graduation Ceremony held from Vienna on June 17.

It has been developed In collaboration with WHO, and the Ministry of Ayurveda, Yoga & Naturopathy, Unani, Siddha and Homoeopathy (Ministry of AYUSH), Government of India.

The app is safe and secure, collecting no data from users at all, and can be used as a daily yoga companion for persons aged 12-65 years.

This will help us in our ‘One World, One Health’ motto.”M- Yoga app is currently available in English, Hindi and French. It will be available in other UN languages in the upcoming months.

The Centre for Science and Environment released the Ease of living index 2020. 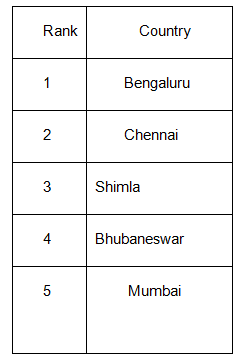 It focused on four parameters: quality of life, economic ability, sustainability and citizens’ perceptions.This is the second edition of the index, the first one was launched in 2018.

The inflow was boosted by acquisitions in the information and communication technology (ICT) industry.

Jnanpith awardee and bestselling author Amitav Ghosh authored a new book titled The Nutmeg’s Curse: Parables for a Planet in Crisis is all set to release in October 2021.

On June 19, 2021, Department of Industry and Internal Trade secretary Dr Guruprasad Mohapatra Passed away. He was 59.

Guruprasad Mohapatra was a Gujarat cadre 1986-batch IAS officer.He is the first serving Secretary to the Government of India. He was appointed to the DPIIT in August 2019.