Dear Aspirants, Here we have given the Important English Grammar Tips in usage of English Tenses, candidates those who are preparing for the SBI, RBI, IBPS and all other competitive exams can make use of it.

SIMPLE PRESENT TENSE: It is called the tense of science because all the scientific and universal truths are expressed in simple present tense.

Usually, often, as usual, ever, in general, Frequently, generally, sometimes, always, in these days, Rarely, regularly, seldom, as a rule, occasionally, Normally, Hardly ever, periodically, scarcely, Now- a- days, Daily, in modern days, every time, never, every day, Every week, Every month, Every year, once, twice/in a week…

SIMPLE PRESENT TENSE:
A)Used to express a regular, habitual, or repeated actions or events.
Eg: He takes the dog out twice a day.

B)To express a universal truth or scientific principle.
Eg: The planets revolve round the sun.

D)Used in proverbs and maxims.
Eg: Honesty is the best policy.

G)To tell about Past events in a dramatic way.
Eg: Now King Porus leads his army and attacks Alexander.

An action that is happening continuously at present can be expressed in present continuous tense. 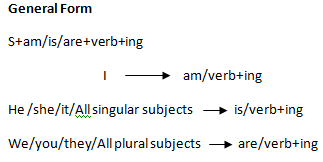 Keywords
Now, still, always, At present, still now, presently, At this moment, even now, any longer, Any more

PRESENT PERFECT TENSE
It is used to refer the action completed recently.

He has just gone out.

I have always spoken the truth.

It can be used to refer an action that began in the past, happening in the present and will continue in future.

Keywords
Since, for
Examples
We have been working hard for the examination for three months.
It has been raining heavily since last evening.

It is used to express an action, which took place in the past and is completed by the time of speaking.

Keywords
Yesterday,  last week, last month, Last year, ago, once, Once upon a time, in those days, one day, Then, since, in olden days, In ancient times, in early days, in my childhood, In my boyhood days, long long ago, two years ago

Examples
Our School celebrated its Silver Jubilee last month.
We got Independence on 15th August 1947.

Used to refer an action has happening at a particular point of time in the past.

Keywords
All last night, from two o’clock to four, All morning yesterday, at 9 o’clock this morning, For a long time yesterday, throughout the night

It was raining throughout the night.

While Bama was dancing, she fell down.

While my mother was cooking, my father was listening to the radio.

I was reading when he came in.

It can be used to refer two actions in the past. The first completed action should be in Past Perfect and the next one should be in the Simple Past Tense.
General Form
S+had+Past Participle

After the tailor had taken the measurements, he cut the clothes.

We had reached home before it began to rain.

We had taken our dinner by eight o’clock.

Used to refer the actions that happened in the past for a particular period but not now.
General Form
S+had+been+verb+ing

Keywords
Since, for
Examples
When I met him in 1950 he had been living in Chennai for five years.
Ha had been teaching English. 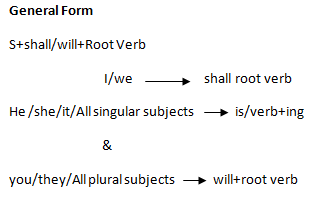 Keywords
Tomorrow, in future, Next week, early, Next month, next Monday,
Soon, in a few minutes, Shortly,          in the coming days, In 2018, later, Hereafter, this evening,
In a little time, in the years to come, Within a week

Examples
We shall buy a T.V. next month.
You will know the result in a week.

Used to indicate the completion of an action before a given time in the future.

He will be travelling all the morning tomorrow.

My father will be reading the newspaper  at 8 a.m. tomorrow.

FUTURE PERFECT TENSE
Used to refer an action that will be expected of its completion at a particular time in the future.
General Form
S+shall/will+have+Past Participle

Keywords
By the end of this year, By this time tomorrow, In two years time, In July next year, In another five months

Examples
By April next year, I Shall have completed the 10th standard.
The classes will have begun by the time you reach school.

FUTURE PERFFECT CONTINUOUS TENSE
Used to refer the action that will begin in the future and will be happening continuously.
General Form
S+shall/will+have+been+verb+ing

Keywords
By the end of this year, By this time tomorrow, In two years time, In July next year, In another five months

Dear Aspirants, Below we have given some exercise questions which may consist of errors (based on above notes), check whether the statement has error or not if any give your answers in the below comment section.

1). Parents – father and mother. Parent – only one of the two. So, are your parents coming for the festival?

2). The complement of the verb to be , when it is expressed by a pronoun, should be in the nominative( subject) form. ‘ Is’ is aform of to be. ‘Him’, which is in the objective case, should therefore be changed to ‘he’. So, it is he that I have been looking for.

3). The sentence gives the impression that ‘being’ is the participle used for the pronoun ‘we’. So, we may not say ‘we are a nice day’. It is absurd. We must use the pronoun ‘it’ in this place. So, It being a n ice day, we decided to go out.

5). The relative pronoun who does not refer to one, but to servants. So, the verb should be plural. So, He is one of the servants who hardly over work.

6). Would sooner is followed by an infinitive without to. So, He would sooner quit the job than bear such insult.

8). ‘Infested with’ is the correct form. So, the courtyard is infested with flies.

9). Learn is followed by the infinitive. So, learn to respect your parents.

10). ‘The crowd’ is a collective noun. So, it takes singular verb. So, the crowd has no answer to what the culprit says.

11). Denied means ‘to declare untrue’ is a negative word so it is not necessary to add one more negative not to it. So, He denied that he was a thief.

12). Dare is followed by an infinitive without to. So, He dares not commit a murder.

13). ‘Three member bench’ is collective noun but the members in it behave variously because the verdict is different. So, the verb takes plural form. So, the three-member bench were divided in its verdict.

14). The action of going is not continuous, but over, we should use past participle. So, this made me think of the time gone by.

16). The sentence is giving the fact. So, several distances give the fact of a single distance sense. It takes singular form and singular verb. So, thirty kilometres is a big distance.

17). Considering the mood and emotion of the sentence ‘is’ is not the appropriate form of ‘be’ here. The past subjunctive of ‘be’ is ‘were’. So, He works as if today were the last day of his life.

19). News is usually treated as singular. So, the news is being broadcasted to you from the All India Radio.

20). Rainbow would exist for a short span. So we may not use continuous tense.  Simple present tense is the correct tense form. So, I see a rainbow in the sky.