Dear Aspirants, Our IBPS Guide team is providing new series of Reasoning Questions for IBPS PO Prelims 2020 so the aspirants can practice it on a daily basis. These questions are framed by our skilled experts after understanding your needs thoroughly. Aspirants can practice these new series questions daily to familiarize with the exact exam pattern and make your preparation effective.

1) In the given number “568943724638” two is subtracted from each odd digit and one added to each even digit of a number then which of the following number is repeated more than two times?

Direction (2-4): Read the following information carefully and answer the questions given below.

4) How many married couples are there in the family?

5) If it is possible to make a three letter meaningful word by using the third, fourth, and seventh letters of the word “CURIOUS”, then How many words can be formed?

Directions (6-10): Study the following information carefully and answer the below questions.

In a certain coding language,

7) What is the code for ‘Mahindra Oracle’?

8) What does “tno” represent in a coded language?

9) If “IBM Patni” is coded as “naj tap” then what does “aeu ean stm” represent in a code language? 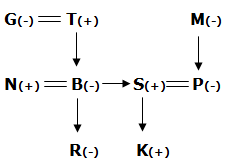