Important Days in July 2021: Theme, Check the List for Preparation of All Competitive Exams 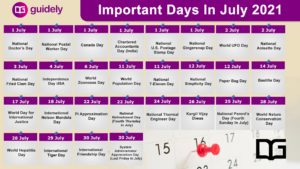 July 1st is celebrated as National Doctor’s Day (India) to show gratitude to all the doctors who have selflessly aided human lives in times of their need and tirelessly worked for their patients’ health and acknowledge the contributions of doctors to mankind.

National Postal Worker Day 2021 is observed on July 1 every year to recognize postal workers across the world. Online shopping has now become a lifeline for many of us, even during the time of pandemic the postal workers transported COVID-19 testing kits, distributing sanitizers and masks across the country.

Canada Day is the national day of Canada which is celebrated on 1 July every year. It is a federal statutory holiday that celebrates the anniversary of the Canadian Confederation.

National Gingersnap Day is a food holiday celebrated on July 1 of every year. Gingersnaps are found to be healthier than other cookies because of their anti-inflammatory properties, the power to stimulate blood circulation, fights with heart disease, and other illnesses.

World UFO Day is celebrated every year on the second day of July to spread awareness about unidentified flying objects and acknowledge UFOs’ existence. The day was first observed in 2001 by UFO researcher Haktan Akdogan.

On July 2nd, we recognize a liqueur derived from aniseed on National Anisette Day. Aniseed from the anis herb gives anisette its licorice or fennel flavor.

National Fried Clam Day is observed annually on July 3rd. Fried clams are an iconic food in the New England states. Seaside clam shacks or roadside restaurants serve these delectable nuggets and tend to be the primary source for anyone seeking them.

Independence Day (the Fourth of July or July 4) is a federal holiday in the United States commemorating the Declaration of Independence of the United States, on July 4, 1776. The Continental Congress declared that the thirteen American colonies were no longer subject (and subordinate) to the monarch of Britain, King George III, and were now united, free, and independent states.

World Population Day on July 11 is a holiday that’s dedicated to focusing on the importance of population issues. The day was established by the United Nations as a result of the massive interest people had in Five Billion Day in 1987. Read on for more information about observing this important holiday.

Every annual year, on July 11, the National 7-eleven day is observed. The National 7-eleven Day celebration is done on a massive scale in the United States of America each year. On this day, Slurpee drinks are disturbed amongst the American citizens completely free of cost.

National Simplicity Day is observed every year on July 12 to honor the life, work, and philosophies of the poet, author, and leading transcendentalist Henry David Thoreau. Born on July 12, 1817, Thoreau was an advocate of living a simple life and wrote several books around the subject

Paper bags are an environment-friendly alternative to harmful plastic bags and “Paper Bag Day” is celebrated worldwide on July 12. The day aims to spread awareness about using paper bags instead of plastic to help reduce plastic waste that takes thousands of years to decompose.

Bastille Day or the French National Day is celebrated every year on July 14. In 1789, on this day, a violent uprising helped usher the French Revolution. Citizens stormed the Bastille fortress, which was used to lodge the state prisoners.

In December 2014, the United Nations General Assembly adopted a resolution declaring 15th July as World Youth Skills Day. The goal is to achieve better socio-economic conditions for today’s youth to address the challenges of unemployment and under-employment.

World Emoji Day is an annual unofficial holiday occurring on 17 July, intended to celebrate emoji; in the years since the earliest observance, it has become a popular date to make the product or other announcements and releases relating to emoji.

Pi Day is an annual celebration of the mathematical constant π. Pi Day is observed on March 14 since 3, 1, and 4 are the first three significant digits of π. It was founded in 1988 by Larry Shaw, an employee of the Exploratorium. Celebrations often involve eating pie or holding pi recitation competitions.

Every year July 23 is dedicated to National Mango Day. The best way to observe National Mango Day is by eating mangoes, a lot of them. The mangoes are juicy, sweet fruits with a seed at the center and they are one of the many species of tropical trees.

National Refreshment Day on the fourth Thursday in July celebrates fun at the hottest time of the year. The day toasts those moments of ice, cold refreshment, especially a nice cold beer.

National Parents’ Day honors all parents on the fourth Sunday in July. No matter where our parents maybe, this day serves to celebrate their important role in our lives.

Kargil Vijay Diwas is a holiday observed in India on the 26th of July. On this date in 1999 India successfully took command of the high outposts. The Kargil war was fought for more than 60 days and ended on 26 July 1999, when the Pakistani army took advantage of the melting snow and – betraying the bilateral understanding of both the nations that the post would remain unattended during the winter season – took command of the high outposts of India.

Celebrated on July 28 each year, World Nature Conservation Day acknowledges that a healthy environment is a foundation for a stable and healthy society. To ensure the well-being of the present and future generations, we all must as responsible human beings participate in protecting and conserving our nature.

World Hepatitis Day is recognized annually on July 28th, the birthday of Dr. Baruch Blumberg (1925–2011). Dr. Blumberg discovered the hepatitis B virus in 1967, and 2 years later he developed the first hepatitis B vaccine. These achievements culminated in Dr. Blumberg winning the Nobel Prize.

Global Tiger Day, often called International Tiger Day, is an annual celebration to raise awareness for tiger conservation, held annually on 29 July. It was created in 2010 at the Saint Petersburg Tiger Summit in Russia.

World Friendship Day, also known as International Day of Friendship takes place on 30th July. The original idea for a day of friendship came from Hallmark cards in the 1930s.

System Administrator Appreciation Day, also known as Sysadmin Day, SysAdminDay, is an annual event created by system administrator Ted Kekatos. The event exists to show appreciation for the work of sysadmins and other IT workers. It is celebrated on the last Friday in July.

So, aspirants prepare with this List of Important Days in July 2021 with Themes for the  National and International events for all competitive exams.