Dear Aspirants, Our IBPS Guide team is providing new series of Reasoning Questions for IBPS Clerk Mains 2021 so the aspirants can practice it on a daily basis. These questions are framed by our skilled experts after understanding your needs thoroughly. Aspirants can practice these new series questions daily to familiarize with the exact exam pattern and make your preparation effective.

Direction (1-5): Study the following information and answer the questions given below.

Eight friends – P, Q, R, S, T, U, V and W are seated around a circular table such that they are at equal distances from each other and facing inwards but not necessarily in the same order. Four of them are true persons (always speaking the truth) and the remaining four are false persons (always speaking a lie). The true and false persons are seated alternatively. They record their statements as follows:

S: U is sitting second to my left.

V: Q is sitting opposite to me.

W: V is a true person and he faces U.

P: R, who is an immediate neighbour of V, is sitting second to my left.

1) Who among the following is sitting third to the left of V?

2) Who among the following is sitting fourth to the right of W?

3) Which among the following pair of people is an immediate neighbour of T?

4) Which of the following statement is true?

A.V is a true person

B.R sits third to the right of S

C.V faces the immediate neighbour of U

5) If all the persons are made to sit in alphabetical order from the right of P, then the position of how many persons remains unchanged excluding P?

Which of the following arguments weaken the fear of the firms?

I). The Reef and Rainforest Research Centre recently published a markedly report, heralding “significant signs of recovery” at major dive sites around Cairns.

II). Although government data shows that the number of visitors to the broader region has increased, those figures are older and don’t include coral-viewing activities.

III). Australians also appear divided on the damage done to the reef. Only half of the country thinks that climate change is already destroyingthe reef.

B.Only I and III are strong.

C.Only II and III are strong.

7) Statement:India has constituted a group to study the Special Economic Zones (SEZ) policy of India. The group will evaluate the SEZ policy and suggest measures to cater to the needs of exporters in the present economic scenario. This comes after the United States challenged India’s entire set of export subsidy programs in the WTO.

Why is the United States unhappy with India?

II). According to them, India’s export subsidies do not let the developers of India have full freedom of subcontracting, importing without a license, etc.

III). According to them, India appears to be providing subsidies through various export promotion programs, SEZs, etc. which is harming their companies.

B.Only I and II are strong.

C.Only II and III are strong.

Directions (8-9): Study the following information carefully and answer the questions given below:

Eight persons R, V, M, K, T, G, S and P are arranged according to their weight. Each one of them likes different colour White, Orange, Blue, Green, Grey, Brown, Yellow and Black.

8) How many persons are heavier than K?

9) Which of the following person likes Brown?

Some red are blue.

No blue is a doll.

Only a few blue are black.

All green is black.

I). Some green are blue.

II). Some black are not doll.

A. Only IV follows

B. Only II follows 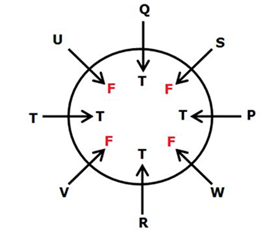 The seating arrangement of true and false persons will be as follows: 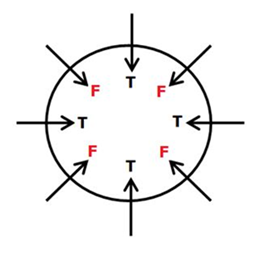 To consider who is a true person and who is a false person, Let us assume the below:

(i) Considering the Statement of S as True: 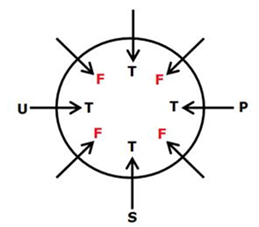 S: U is sitting second to my left.

P: R, who is an immediate neighbour of V is sitting second to my left. (Doesn’t satisfy)

So, we can conclude that ‘S is a False Person’.

(ii) Considering the Statement of U as True: 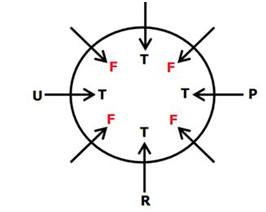 P: R, who is an immediate neighbour of V is sitting second to my left.

R: T is sitting second to my left.(Doesn’t satisfy)

So, we can conclude that ‘U is a False Person’.

(iii) Considering the Statement of R as True: 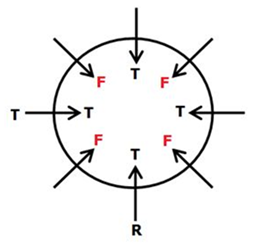 T: S is a false person. (Not sufficient)

Since, R is a true person; T is also a true person. But from the statement of T, we don’t get any arrangement further.

(iv) Considering the Statement of V as True: 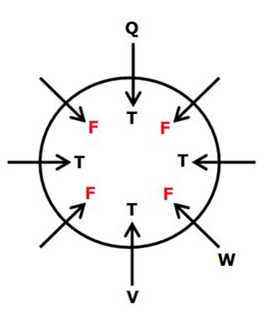 V: Q is sitting opposite to me.

W: V is a true person and he faces U. (Doesn’t satisfy)

So, we can conclude that ‘V and W as a False Person’.

From the above assumptions, we could end up finding the list of false and true persons.

From the statements of true persons we get,

P: R, who is an immediate neighbour of V is sitting second to my left. 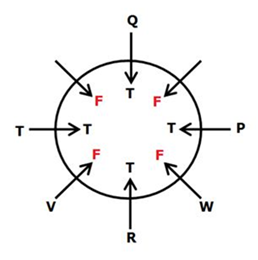 Also, as W says lies, from his statement-‘V is a true person and he faces U’.

We can conclude that U doesn’t face V. So we get the final arrangement as, 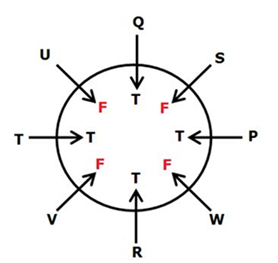 The argument I clearly state that the report published by The Reef and Rainforest Research Centre is optimistic and it talks about the significant signs of recovery. Hence argument I is relevant to the given statements.

The argument II shows that the number of visitors has increased but data about coral visiting activities is not included so argument II weakens the statement.

The argument III is not relevant to the statement so it is neither making statement strong or weak.

We first make sure to read the statement carefully and then see what immediate inferences can be drawn based on our first reading. The next step is to look at the arguments given in the options, analyze them and see if they seem relevant with respect to the information/data provided to us. Finally, it is very important to study the question closely.

The question is asking about the US’ discontent with India. Since the statement clearly mentions that the decision related to the SEZ policy comes after the intervention of the US, it is clear that it affects them in some ways. 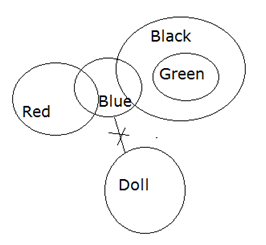