Dear Aspirants, Our IBPS Guide team is providing a new series of English Language Questions for SBI Clerk Mains 2020 so the aspirants can practice it on a daily basis. These questions are framed by our skilled experts after understanding your needs thoroughly. Aspirants can practice these new series questions daily to familiarize with the exact exam pattern and make your preparation effective.

Directions (1-5): In each of the question there are four sentences. In each sentence a pair of words is italicized and highlighted. From the italicized and highlighted words select the most appropriate the word (A or B) to form correct sentences. The sentences are followed by options that indicate the words, which may be selected to correctly complete the set if sentences. From the options given choose the most appropriate one.

A) For those who have spent the whole period under trials, the period(A) undergone / (B) underlyingshould be considered fir remission.

C) The prison has succeeded in reducing (A)recidivism / (B) racism.

D) The latest figures are in stark (A) contract / (B) contrast to core sector growth of 4.3% reported during the same month last year.

A) The government at the Centreis clearly in an(A) unenviable / (B) inevitable position with very little fiscal leeway to boost growth by increasing its spending.

B) The government has rightly asked WhatsApp to explain (A) breach / (B) beseech.

C) Nations need to (A) adopt / (B) adapt green developmental technologies for balancing growth and environment.

A) For reporters on every ‘beat’, every assignment is a dot on a learning (A) carve / (B) curve.

B) The Prime Minister and Home Minister have (A) sited / (B) citedtwo reasons to justify the dilution.

D) But we also known from lots of election surveys that Indians voters have a sophisticated understanding of the economy and of their pocket book considerations of who they see as (A) credible / (B) creditablepeople to vote for.

A) Shifting from labour-intensive establishments from Saudi Arabia to India would serve the respective national priorities by reducing the kingdom’s (A) expatriate / (B) expatiate population and boosting ‘Make in India’.

C) In both the States, the BJP succeeded in(A) winning / (B) weaning away a significant strata of dominant castes through rewards as well as using threats of deprivation.

D) We (A) preclude / (B) persecute and brutalise citizens who have a vision of our nation for the sake of that ‘nation’.

A) “In my hind sight I can see it was my inexpensive and (A) naivety / (B) native with which I had said that”, she told the court.

B) Savarkar, who faced trial in the Gandhi (A) assertion / (B) assassinationcase but was acquitted had not been pronounced innocent by the Court, he claimed.

C) Amid the backlash, Mr. Jami (A) pleaded / (B) pledged with social mediausers to trust victims of sexual assault and avoid ignoring their accusations.

D) Even the exit polls could not (A) shrine / (B) shine through such blinkers. 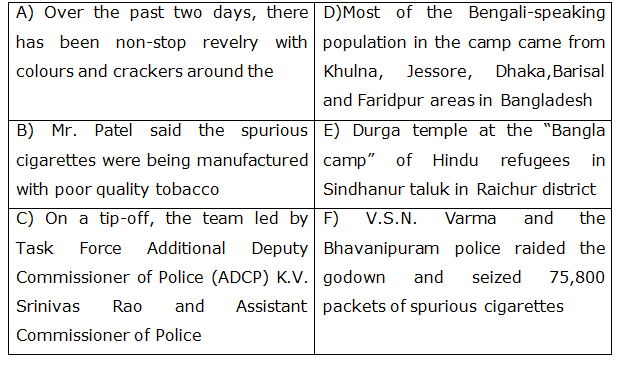 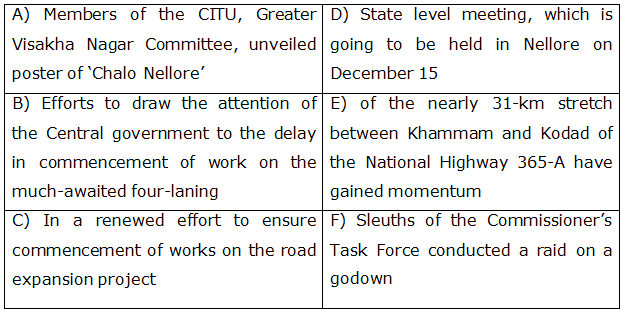 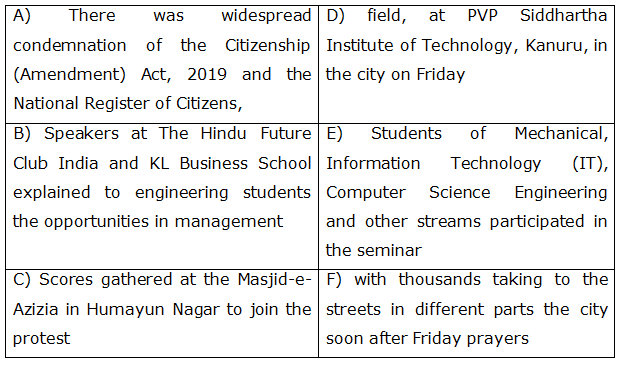 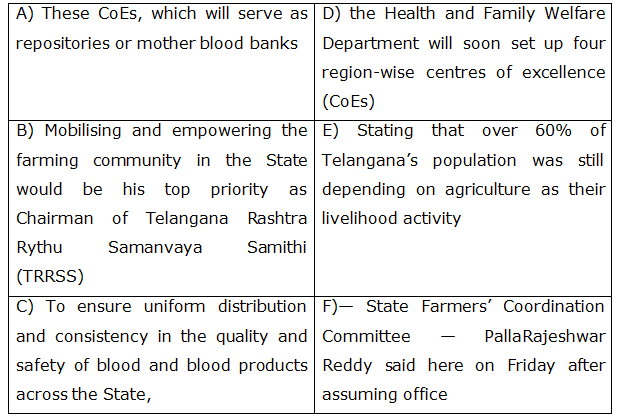 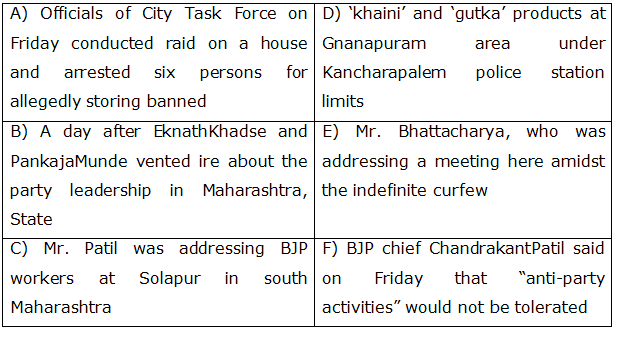 In (A) “undergone” meansexperience or be subjected to (something, typically something unpleasant or arduous).

“underlying” means be the cause or basis of (something).

In (B) “imperfect” means faulty or incomplete.

In (C) “recidivism” means the tendency of a convicted criminal to reoffend.

“racism” means prejudice, discrimination, or antagonism directed against someone of a different race based on the belief that one’s own race is superior.

“contrast” means the state of being strikingly different from something else in juxtaposition or close association.

So correct answer is D.

In (A) “unenviable” meansdifficult, undesirable, or unpleasant.

In (B) “breach” means an act of breaking or failing to observe a law, agreement, or code of conduct.

“beseech” meansask (someone) urgently and fervently to do something; implore; entreat.

In (C) “adopt” means legally take (another’s child) and bring it up as one’s own.

“adapt” means make (something) suitable for a new use or purpose; modify.

So correct answer is A.

In (A) “carve” meanscut (a hard material) in order to produce an object, design, or inscription.

“curve” means a line or outline which gradually deviates from being straight for some or all of its length.

In (B) “sited” means fix or build (something) in a particular place.

“cited” means refer to (a passage, book, or author) as evidence for or justification of an argument or statement.

In (C) “flawed” means having or characterized by a fundamental weakness or imperfection.

In (D) “credible” means able to be believed; convincing.

So correct answer is C

In (A) “expatriate” meansa person who lives outside their native country.

“expatiate” means speak or write in detail about.

In (B) “jargon” means a form of language regarded as barbarous, debased, or hybrid.

“jingoist” means an extreme form of patriotism that often calls for violence towards foreigners and foreign countries.

In (C) “winning” means ‘be successful or victorious in (a contest or conflict)’.

“weaning” means be strongly influenced by (something), especially from an early age.

“persecute” meansharass or annoy (someone) persistently.

So correct answer is B

In (A) “naivety” meanslack of experience, wisdom, or judgement.

“native” meansassociated with the place or circumstances of a person’s birth.

In (B) “assertion” means a confident and forceful statement of fact or belief.

“pledged” means commit (a person or organization) by a solemn promise.

“shine” meansa quality of brightness produced when light is reflected on something.

So correct answer is A.

From the given options only A-E, C-F is matched and make a meaningful sentence. The correct answer after matching will be

(A-E): Over the past two days, there has been non-stop revelry with colours and crackers around the Durga temple at the “Bangla camp” of Hindu refugees in Sindhanur taluk in Raichur district.

From the given options only A-D, B-E is matched and make a meaningful sentence. The correct answer after matching will be

(A-D):Members of the CITU, Greater Visakha Nagar Committee, unveiled poster of ‘Chalo Nellore’ State level meeting, which is going to be held in Nellore on December 15.

(B-E):Efforts to draw the attention of the Central government to the delay in commencement of work on the much-awaited four-laning of the nearly 31-km stretch between Khammam and Kodad of the National Highway 365-A have gained momentum.

From the given options only A-F, B-Dis matched and make a meaningful sentence. The correct answer after matching will be

(A-F): There was widespread condemnation of the Citizenship (Amendment) Act, 2019 and the National Register of Citizens, with thousands taking to the streets in different parts the city soon after Friday prayers.

(B-D): Speakers at The Hindu Future Club India and KL Business School explained to engineering students the opportunities in management field, at PVP Siddhartha Institute of Technology, Kanuru, in the city on Friday.

From the given options only B-F, C-D is matched and make a meaningful sentence. The correct answer after matching will be

(B-F):Mobilising and empowering the farming community in the State would be his top priority as Chairman of Telangana Rashtra Rythu Samanvaya Samithi (TRRSS) — State Farmers’ Coordination Committee — PallaRajeshwar Reddy said here on Friday after assuming office.

(C-D):To ensure uniform distribution and consistency in the quality and safety of blood and blood products across the State, the Health and Family Welfare Department will soon set up four region-wise centres of excellence (CoEs).

From the given options only A-D,B-F is matched and make a meaningful sentence. The correct answer after matching will be

(B-F):A day after EknathKhadse and PankajaMunde vented ire about the party leadership in Maharashtra, State BJP chief ChandrakantPatil said on Friday that “anti-party activities” would not be tolerated.