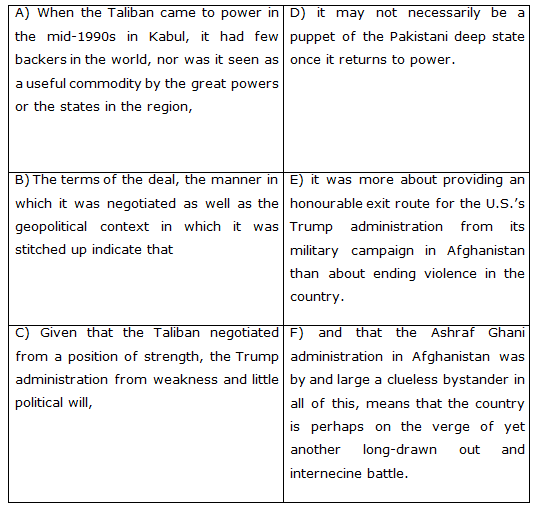 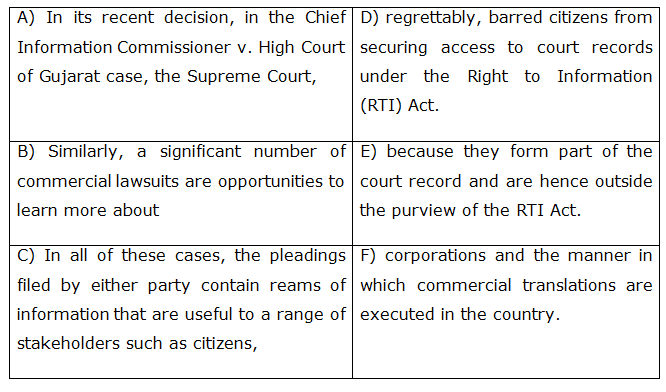 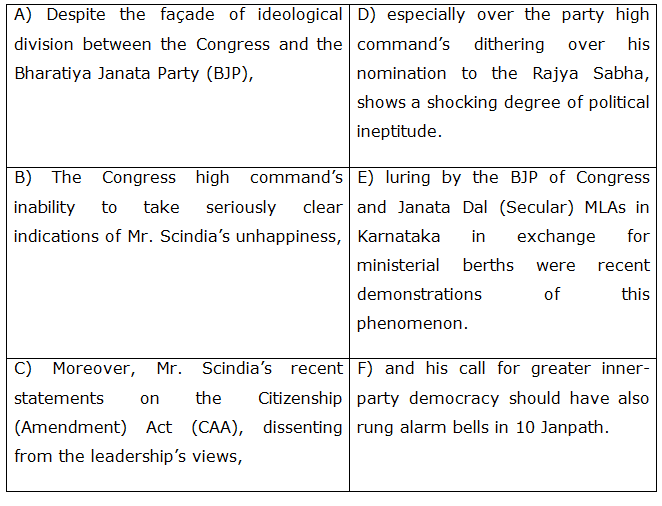 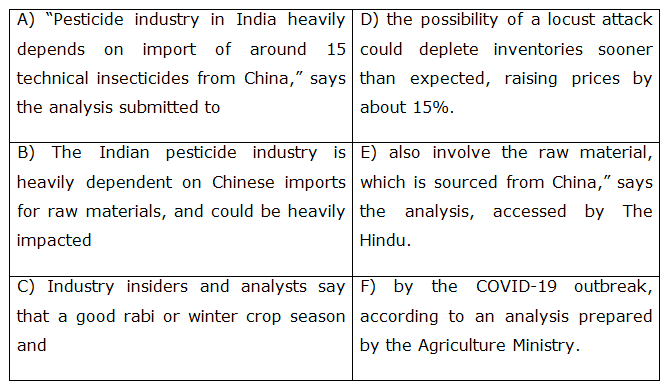 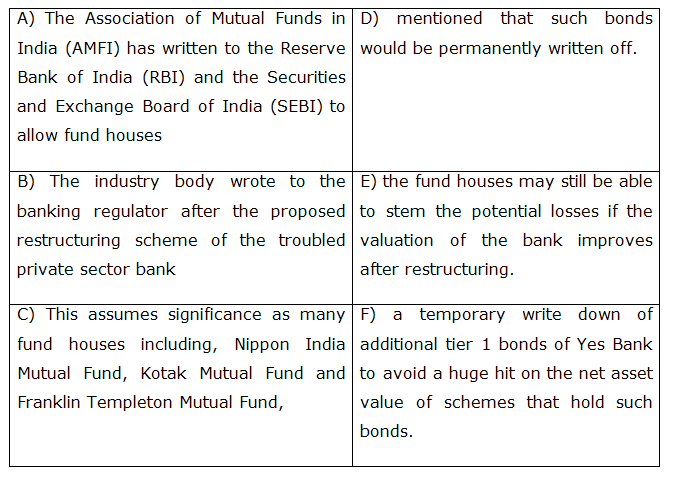 Direction (6-10): Given below are three sentences I,II and III. each sentence is divided into five parts (a), (b), (c), (d) and (e). Read each sentence to find out whether there is any grammatical error in it. The error, if any, will be one part of the sentence where part (e) denotes no error. You are given five options suggesting which part of each of the sentences together can have a grammatical error. Identify the correct option.

(I). More than two dozen firefighters (a)/ and police officers in Kirkland which have responded (b)/ to calls at the Life Care Center over the last few weeks have been placed (c)/ under quarantine, according to the city government.(d)/

(II). A group of about 16 nursing students (a)/ and one faculty member from the Lake Washington Institute of Technology (b)/ visited the Life Care Center late last week, (c)/Dr Amy Morrison, president of the college, said in a statement.(d)/

(III). Health officials said on Saturday (a)/ they did not see any connection between (b)/ the man who died but the nursing facility, (c)/ but they were still investigating how those patients contracted the virus.(d)/

(I). Prof Chris Whitty, the chief medical officer for England,(a)/ said the patient “had no relevant travel”(b)/ and an investigation was under way to determine (c)/whether the patient contracted the virus directly or indirectly from someone who had recent returned from overseas.(d)/

(II). The case suggest the country is edging closer (a)/ to the point where containment becomes impossible (b)/ because the virus is being spread by people who are (c)/ either unaware they are infected, or are diagnosed too late to prevent onward transmission. (d)/

(I). The 38-year-old former mayor of South Bend has never hold (a)/ statewide or national office but made a strong run in the Democratic primary,(b)/ winning the Iowa caucuses narrowly from Bernie Sanders, now the national frontrunner, (c)/ to whom he placed second in New Hampshire.(d)/

(II). Speaking to CNN on Sunday morning, Biden said he had not had (a)/ any conversations with other candidates about whether they should drop out (b)/ and back him but added: “I think everyone knows it’s going to be much more difficult (c)/ to win back the Senate and keeping control of the House if Bernie’s at the top of the ticket.” (d)/

(III). “He obviously has work to do on some things that (a)/ – some weaknesses we’ve seen in this election (b)/ – but whenever there is a conversation again about Democratic candidates, (c)/he’ll be in that conversation and that’s a remarkably achievement, given where he started a year ago.”(d)/

(I). The prime minister made similar appeals (a)/ before the previous votes on April, he said (b)/he would annex all current settlements, and in September (c)/ he promised to go further, by claiming sovereignty over a third of the entire West Bank.(d)/

(II). In preparation for election day,(a)/ the Israeli military closed crossings on the occupied West Bank,(b)/ where more than 2.5 million Palestinians live under Israeli rule(c)/ but cannot vote, and Gaza, where 2 million more live under a blockade(d)/.

(III). Political parties fear a low turnout on Monday (a)/ as voters become apathetic about (b)/the politically stalemate and fearful of the spread of coronavirus, (c)/issues that could drastically affect the result in such a small country.(d)/

(I). At her weekly news conference in Wellington on Monday,(a)/ Ardern was scathing about Dutton’s criticism of her recent meeting with Scott Morrison, (b)/saying it was not her plain-talking that was to blame for increase tensions between the neighbours (c)/ – but Australia’s policy decisions on immigration matters which were hurting Kiwis.(d)/

(II). Prisoners and members of the Roma community,(a)/ along with elderly people and a poorest in society,(b)/ will be the focus of a new EU push to help Europeans (c)/ “outside the mainstream” to remain in the UK after Brexit.(d)/

(III). EU nationals need to apply before 31 June 2021 (a)/ to remain in the UK but there is uncertainty (b)/about the number of citizen affected and the level of success (c)/ in information getting through to the most cut-off groups.(d)/

From the given options only B-E, C-F is matched and make a meaningful sentence. The correct answer after matching will be

(B-E): The terms of the deal, the manner in which it was negotiated as well as the geopolitical context in which it was stitched up indicate that it was more about providing an honourable exit route for the U.S.’s Trump administration from its military campaign in Afghanistan than about ending violence in the country.

(C-F): Given that the Taliban negotiated from a position of strength, the Trump administration from weakness and little political will, and that the Ashraf Ghani administration in Afghanistan was by and large a clueless bystander in all of this, means that the country is perhaps on the verge of yet another long-drawn out and internecine battle.

From the given options only A-D, B-F is matched and make a meaningful sentence. The correct answer after matching will be

(A-D): In its recent decision, in the Chief Information Commissioner v. High Court of Gujarat case, the Supreme Court, regrettably, barred citizens from securing access to court records under the Right to Information (RTI) Act.

(B-F): Similarly, a significant number of commercial lawsuits are opportunities to learn more about corporations and the manner in which commercial translations are executed in the country.

From the given options only B-D, C-F is matched and make a meaningful sentence. The correct answer after matching will be

(B-D): The Congress high command’s inability to take seriously clear indications of Mr. Scindia’s unhappiness, especially over the party high command’s dithering over his nomination to the Rajya Sabha, shows a shocking degree of political ineptitude.

(C-F): Moreover, Mr. Scindia’s recent statements on the Citizenship (Amendment) Act (CAA), dissenting from the leadership’s views, and his call for greater inner-party democracy should have also rung alarm bells in 10 Janpath.

From the given options only B-F, C-D is matched and make a meaningful sentence. The correct answer after matching will be

(B-F): The Indian pesticide industry is heavily dependent on Chinese imports for raw materials, and could be heavily impacted by the COVID-19 outbreak, according to an analysis prepared by the Agriculture Ministry.

(C-D): Industry insiders and analysts say that a good rabi or winter crop season and the possibility of a locust attack could deplete inventories sooner than expected, raising prices by about 15%.

From the given options only A-F, B-D is matched and make a meaningful sentence. The correct answer after matching will be

(A-F): The Association of Mutual Funds in India (AMFI) has written to the Reserve Bank of India (RBI) and the Securities and Exchange Board of India (SEBI) to allow fund houses a temporary write down of additional tier 1 bonds of Yes Bank to avoid a huge hit on the net asset value of schemes that hold such bonds.

(B-D): The industry body wrote to the banking regulator after the proposed restructuring scheme of the troubled private sector bank mentioned that such bonds would be permanently written off.

Part (II) does not contain any error.