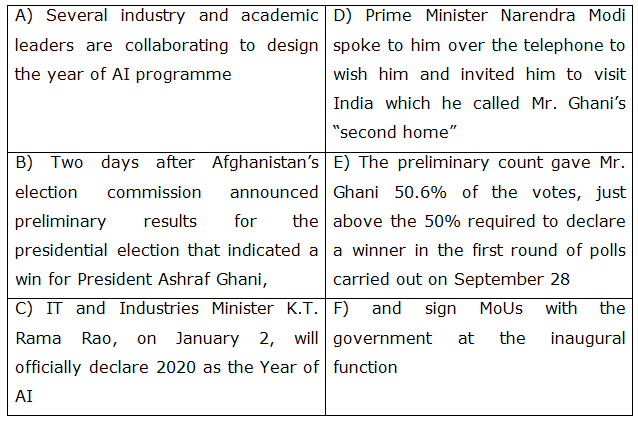 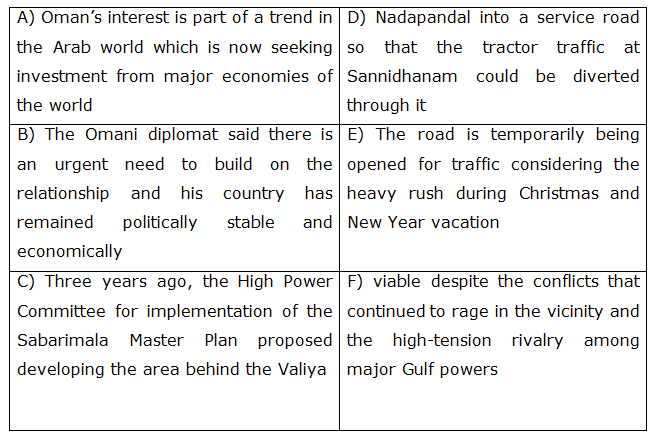 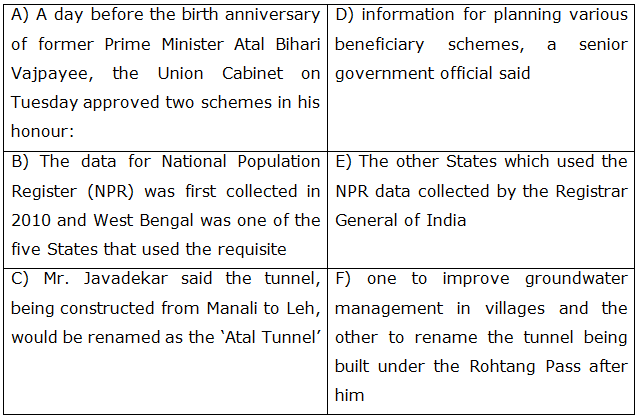 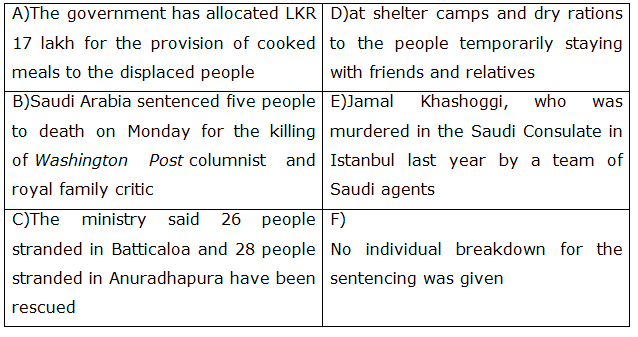 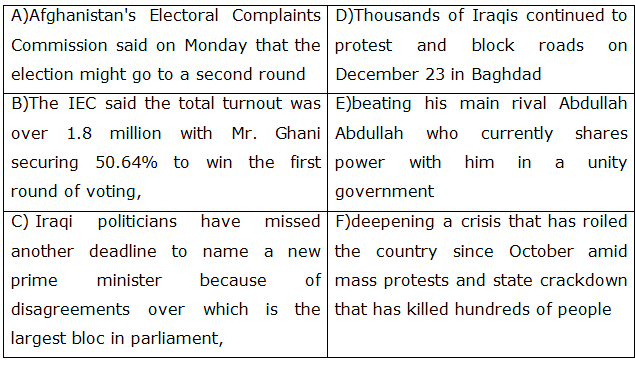 Direction(6-10): In each of the question there are four sentences. In each sentence a pair of words is italicized and highlighted. From the italicized and highlighted words select the most appropriate the word (A or B) to form correct sentences. The sentences are followed by options that indicate the words, which may be selected to correctly complete the set if sentences. From the options given choose the most appropriate one.

A) Increase in speed multiplies the risk of accident and (A) severity / (B) sovereignty of injury during accident.

C) Few will doubt that his (A) acumen / (B) arcane and personal charisma were crucial to his brother’s victory.

D) Clearly, the Assam proposal will be in defiance of the Supreme Court, which directed the entire NRC registration specific to Assam through all its (A) torture / (B) tortuous

A) A court- mandated process, extending it to the entire country is both illogical and (A)bizarre / (B)bazaar.

B) Indians can certainly be(A)spared / (B) speared this pain.

D) The orthodox (A) clothe / (B) cloth him in the robes of sanctimony, radicals in the grabs of rebellion.

A) He (A) glades / (B) glides through all these complication of human contriving to his nameless freedom.

B) Tiruvalluvar has not had to (A)ensure / (B) endure the colouring.

C) Past societies have appeared to relentlessly (A) deprecate / (B) depreciatemeveryday life.

D) Politics will be around the fulfilment of basic needs, to secure a minimally (A) decent / (B) dissent

A) Rather than chase utopias, politics in the near future needs to set its eyes firmly on everyday life (A) woes / (B) woos that beset it.

B) The HFAC statement (A) evoked / (B) invoked the U.S- India relationship.

C) Any agreement would have to be (A) rectified / (B) ratified by the country’s Parliament.

A) A bipartisan Congressional committee has (A) called out / (B) called off a piece of Indian legislation and highlighted the potential damage it could inflict on the U.S- India relationship.

B) This majoritarian notion of religion-based citizenship, although(A) extrinsic / (B) intrinsic to the BJP’s idea of India, is not shared by the majority of people in this country.

C) The JPC appears, however to have overlooked the substantive conditions that the Supreme Court (A) laid down / (B) laid off in the same verdict.

From the given options only A-F,B-D is matched and make a meaningful sentence. The correct answer after matching will be

(A-F): Several industry and academic leaders are collaborating to design the year of AI programme and sign MoUs with the government at the inaugural function.

(B-D):Two days after Afghanistan’s election commission announced preliminary results for the presidential election that indicated a win for President Ashraf Ghani, Prime Minister Narendra Modi spoke to him over the telephone to wish him and invited him to visit India which he called Mr. Ghani’s “second home”.

From the given options only B-F , C-D is matched and make a meaningful sentence. The correct answer after matching will be

(B-F):The Omani diplomat said there is an urgent need to build on the relationship and his country has remained politically stable and economically viable despite the conflicts that continued to rage in the vicinity and the high-tension rivalry among major Gulf powers.

(C-D):Three years ago, the High Power Committee for implementation of the Sabarimala Master Plan proposed developing the area behind the Valiya Nadapandal into a service road so that the tractor traffic at Sannidhanam could be diverted through it.

From the given options only A-F, B-Dis matched and make a meaningful sentence. The correct answer after matching will be

(A-F):A day before the birth anniversary of former Prime Minister Atal Bihari Vajpayee, the Union Cabinet on Tuesday approved two schemes in his honour: one to improve groundwater management in villages and the other to rename the tunnel being built under the Rohtang Pass after him.

(B-D):The data for National Population Register (NPR) was first collected in 2010 and West Bengal was one of the five States that used the requisite information for planning various beneficiary schemes, a senior government official said.

From the given options only A-D, B-Eis matched and make a meaningful sentence. The correct answer after matching will be

(A-D):The government has allocated LKR 17 lakh for the provision of cooked meals to the displaced people at shelter camps and dry rations to the people temporarily staying with friends and relatives.

(B-E):Saudi Arabia sentenced five people to death on Monday for the killing of Washington Post columnist and royal family critic Jamal Khashoggi, who was murdered in the Saudi Consulate in Istanbul last year by a team of Saudi agents.

From the given options only B-E,C-F is matched and make a meaningful sentence. The correct answer after matching will be

(B-E):The IEC said the total turnout was over 1.8 million with Mr. Ghani securing 50.64% to win the first round of voting, beating his main rival Abdullah Abdullah who currently shares power with him in a unity government.

(C-F):Iraqi politicians have missed another deadline to name a new prime minister because of disagreements over which is the largest bloc in parliament, deepening a crisis that has roiled the country since October amid mass protests and state crackdown that has killed hundreds of people.

In (A) “severity” means seriousness.

In (B) “weary” means feeling or showing extreme tiredness

In (D) “torture” means the action or practice of inflicting severe pain on someone as a punishment or in order to force them to do or say something.

“tortuous” means characterized by, involving, or causing pain or suffering.

So correct answer is D.

In (A) “bizarre”  means very strange or unusual.

“bazaar”  means a permanently enclosed marketplace or street where goods and services are exchanged or sold.

In (B) “spared”  means give (something of which one has enough) to (someone).

“speared” means a weapon with a pointed tip

In (C) “clan” means a group of people with a strong common interest.

In (D) “clothe” means endow with a particular quality.

“cloth” means woven or felted fabric made from wool, cotton

So correct answer is C.

In (A) “glades”  means feeling pleasure or happiness.

In (B) “ensure” means make certain that (something) will occur or be the case.

“dissent” means the holding or expression of opinions at variance with those commonly or officially held.

So correct answer is B.

In (A) “woes” meansgreat sorrow or distress (often used hyperbolically).

“woos” meansseek the favour, support, or custom of.

In (B) “evoked “means bring or recall (a feeling, memory, or image) to the conscious mind.

“invoked” means cite or appeal to (someone or something) as an authority for an action or in support of an argument.

“ratified” means sign or give formal consent to (a treaty, contract, or agreement)

“advent” means the arrival of a notable person or thing.

So correct answer is C.

In (A) “called out” means to criticize someone about something they have said or done and challenge them to explain it.

“called off” means to cancel.

In (C) “laid down” means to put or place in a horizontal position or position of rest.

“laid off” means forcing someone and being forced to leave a job.

In (D) “novel” means a fictitious prose narrative of book length, typically representing character and action with some degree of realism.

So correct answer is D